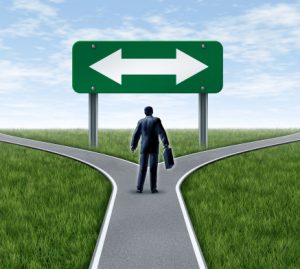 Have you ever had a straight-out choice between something nice and something not so nice? I have faced it, for example, when travelling with someone and we are offered a choice of rooms. Usually, there is one room that is more appealing than another. I try to make “Abraham’s Choice,” and I leave the better room for the other person.

You remember Abraham’s Choice, right? He and his nephew Lot could no longer be together because of the size of their flocks, so Abraham said to him:

To the left was the good, fertile country of the plain, and to the right was a rugged, dryer land. Lot went left – he didn’t make Abraham’s choice – and Abraham went right. It wasn’t logical; it wasn’t right. Abraham could have protested; he was the senior person here. But he didn’t.

And you know how it ended up for Lot and his family, right? Remember Sodom and Gomorrah. It left a salty taste in his mouth.

The story of the Gospel is the story of Abraham’s Choice. Abraham made that choice over and over again in his life. Remember is life as a nomad? Remember his willingness to sacrifice his son Isaac. That’s why the Bible calls him the “father of the faithful.” Abraham prefigured the One who would make the ultimate “Abraham’s Choice.”

The original “Abraham’s Choice” was made by God, who could have chosen to remain in heaven, but chose instead to come to this earth to be with those whom he loved. He chose to take on humanity. He chose to die to redeem our broken lives.

For he chose us in him before the creation of the world to be holy and blameless in his sight. In love, he predestined us for adoption to sonship through Jesus Christ, in accordance with his pleasure and will – Eph 1:4–6.

God chose you. It was neither the most logical nor seemingly attractive choice, given the options, but love and compassion have a way of defying logic, don’t they?