The Gospel is spreading in new ways throughout regions of Africa, thanks to partnerships, commitment and sacrifice.

All across northwest Rwanda, Evangelist Emma is sharing the Message not only with church groups, but with just about anyone she meets!  Apart from the speaking engagements Emma has been invited to due to her partnership with GNU, she is known to bring the Gospel with her and live it out among people she crosses paths with each day.

In line with making sacrifices, Emma often travels long, rustic paths on a bicycle to reach the various people groups who so eagerly await her arrival.  Carried with her are copies of the newly published book,  Jesus + 0, which was written by Gill Ford in 2014 after she was touched by the testimony of a Rwandan genocide survivor.  Gill writes:

I decided to write a small devotional for the women of Rwanda teaching the basics of the gospel of our Lord Jesus Christ and explaining how a person is saved. 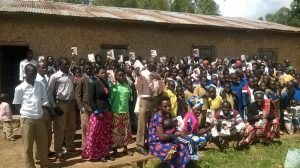 Emma shares the Gospel with the Musanze Church

A title very similar to Emma’s radio programme Jesus Only, the book Jesus + 0 has since been translated into Rwanda’s native language, Kinyarwanda. This decision was easily made when local pastor, David Kayumba realised how impactful its message could be for these congregations full of genocide survivors.  He comments:

The leader of this Church in Rwanda was very grateful that such a gift could be available to his people.  He reminded his congregation about Jesus Only and made vote of thanks to GNU for spreading the Gospel fast.

Along with the Jesus Only radio programme and her own gifts and abilities, Emma now has another tool to utilise when presenting the Gospel. Recently in Nyarutovu, Emma shared a two hour message which was delivered alongside copies of Jesus + 0 for the locals to keep for themselves!

Emma, in partnership with GNU has many more speaking invitations across Rwanda in the near future.