How God Invests in You 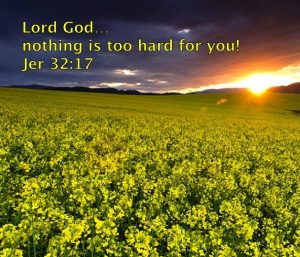 Jeremiah 32 describes a time when things were very bleak for Jeremiah and those who loved God. The Babylonian army was besieging the city of Jerusalem and no help was coming. The city was about to fall; in fact God had said that it would (vv.3–5.) The situation seemed hopeless. The Babylonians surrounding Jerusalem were like the Hitler’s Third Reich of the ancient world, cruel and merciless. They would kill the inhabitants of Jerusalem and Judah, and carry away anyone who was left into slavery. Jeremiah himself is in prison. Not even his own people like him!

Just then, God comes to Jeremiah with a business proposition. He says to Jeremiah, “I want to you to buy your cousin’s field” (v.8.) What a seemingly stupid suggestion! Who in their right mind would be buying real estate in the current situation! Surely the field was doomed! Surely it would be destroyed and made desolate by the Babylonians! Surely it was worthless!

So Jeremiah’s cousin comes to the prison and sells the field to Jeremiah. And Jeremiah pays the price and makes the sale official. And the Lord tells Jeremiah something that seems utterly ridiculous, “Don’t worry; houses, fields, and vineyards will again be bought in this land. Don’t worry, Jeremiah; the market’s going to go up again. You will have your reward; I will bless my people” (v.15.) (By the way, this illustrates a basic principle of investing; always do the opposite of what the market is doing; buy when the market is low and sell when it is high. God is no fool.)

Then Jeremiah scratches his head. He can’t work out the logic behind this. And his emotions are telling him this is a bad investment; a stupid idea. And the Lord speaks to Jeremiah and says, “I am the Lord, the God of all living things! Is anything too hard for me?” (v.27.)

It is then that you will need to remember that there is someone who has already invested in you – Jesus Christ at Calvary. He was a prisoner, just like Jeremiah. He was surrounded by His enemies, just like Jeremiah. And Jesus bought the field of your life. And the price that he paid for it was his blood.

And then he rose from the dead, And through this he declared you righteous in him, and he announced the destruction of the power of sin over your life! So now, when it all seems too hard, Jesus says to you, ““I am the Lord, the God of all living things! Is anything too hard for me?” (v.27.)

What do you need to do now? Just come – Jesus’ constant invitation. Like Jeremiah’s cousin, come to Calvary and give Jesus the field of your life. He has already paid the price with his blood.

How do you come? You simply come by faith. By believing in the truth of this great transaction, and accepting for your life.