I am forgiven; I am accepted; I am loved 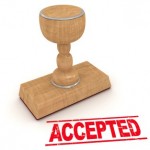 The psychological phenomenon of guilt is a familiar to most people. Other words describe the same thing: shame, self-reproach, disgrace. A squad of emotions accompany guilt: humiliation, remorse, embarrassment, fear and anxiety.

There are many explanations for guilt. Generally it is agreed that guilt is a  deep-rooted unease, springing from fear of not being sufficiently esteemed, approved or believed by others. Some of these apprehensions are based in the reality that we have indeed failed people; we have let them down. More importantly, they stand on the fact that by so doing, we have fallen short of God’s ideal for his children in all their relationships. Guilt of this kind is true and appropriate.

The angst resulting from a sense of being at odds with the will of God has a tragic spin-off in human life.  It can translate into a desperate search for approval from other people. We feel judged by them for no reason that we can think of; we may try too hard to make them like us.  While it may be true that there is not enough love in the world, those plagued by this kind of ‘neediness’ would still feel guilty no matter how much kindness they were shown.  In such an insecure climate of personal relationships, love becomes a ‘currency’ with which men and women learn to trade for their psychological requirements. Eric Fromm has described this state of affairs well:

Conditional love is to be loved for one’s merit; because one deserves it. Conditional love always leaves doubt; maybe I did not please the person whom I want to love me; maybe this, maybe that. There is always a fear that love could disappear. Furthermore deserved love always leave the bitter feeling that one is not loved for oneself; that one is loved only because one pleases; that one is, in the last analysis, not loved at all.

The unworthiness described by Fromm is not primary or appropriate. It is nevertheless real and it is the kind of guilt that contributes to the widespread unhappiness of humankind. A person who knows he has offended someone, or some group may wear himself out trying to win back an approved place in society. Or, he may give up and settle into an angry despair

More than anything, the human race needs to believe in the existence of a universal love, a cosmic good will toward men, a unilateral approval from the Creator, so that they can live out their lives in the certainty that, despite shortcomings, failures, offences and mistakes, they are forgiven, valued, and eternally loved.  Such a final assurance has been spoken to humankind by Jesus Christ.  To know that we are loved, unconditionally, eternally, passionately, is to be liberated from the crippling effects of guilt, and the self-loathing that accompanies all forms of rejection.

Yes indeed, Levi James is a great writer, isn't he!

The last paragraph says it all - worth remembering at all times.