My Son, the Barefoot Bradman

There comes a time in every father’s life when he has to start admitting that his son is better than him at some things. 1 am 47 and my son is 14. This is not easy to write. The time has come. 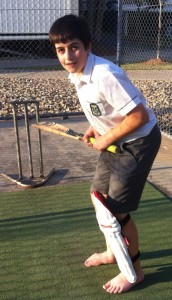 I have always loved cricket. For those of you in the USA, think of it as baseball with a flat bat and no organ music. I always fancied myself more as a bowler than a batter… basically because I was never very good at batting. But I’ll let you in on a secret… I always wanted to be a great batter.

When my son decided to play cricket for sport at his school, I was pleased, because it’s such a great game, although I did warn him that no-one in our family has ever excelled at sport. Before you judge me for gently dashing his hopes, I suggest that f you only knew just by how much our family has not excelled at sport, you would understand that this was something that I was simply obliged to tell my starry-eyed son.

I was pleased when he made the B-grade cricket team. Then I was even more pleased, and my eyebrows were raised, when he made the A-grade cricket team. This is a school with a culture of outstanding sporting performance, and most of my son’s fellow teammates belong to cricket clubs where they train and play regularly on Saturdays. My son didn’t do that. Although he plays regularly with and against state representatives – and probably Australian representatives – for his age, his training largely consists of just looked forward to getting out there and playing cricket.

I should have seen the warning signs about a year ago when we played some cricket in a very large back yard with some of my friends, all of them adults. My son asked to play as well, and as a loving father does, I graciously allowed him to play. At some stage, we even let him bat. Bad move. Suddenly the balls were flying all over the paddock at tremendous speeds, and we adults were exhausting ourselves by having to running after ball after ball. Some were a little annoyed.  Eventually we forced my son to retire so we could get on with our lives. My son was a little disappointed.

Last Thursday, my son invited me to do some father and son cricket training in the nets at school.

The first thing he did when we arrived was to take his shoes off, strictly against my advice of course. Then, grabbing his bat, he went off to face my fearsome bowling with no protection other than a thigh pad. How anyone could face a hard leather ball coming at him at over 100 km per hour with no shoes is something I’m still scratching my head over…. OK, OK so I bowl nowhere hear that fast, but you get the picture!

What followed was a succession of majestic drives, powerful pull shots, and simply imperious slogs. And no matter where I bowled the ball, he almost always seemed to turn it into a perfect length for him to hit, and he almost always seemed to be able to smash it on the leg side. My son… the Barefoot Bradman! For those who don’t know, Sir Donald Bradman was Australia’s most famous cricketing hero, a player with near-perfect and almost unrepeatable batting statistics.

And so the day has come that every father knows will come, although he never imagines it – the day on which I must confess that in this particular field of endeavour, my son is better than me.

It’s true of Jesus as well. John the Baptist was called the greatest of all by Jesus, because he understood that he had to decrease and that Jesus had to increase.

Most of us spend our lives clutching madly at self-importance as the sands of mortal time run our through the hourglass. How few there are who truly accept that true security and identity is only found in giving Jesus first place in everything! In the ideal life, there should continually be less of us, and more of Jesus, until we are so consumed by his love and grace that our lives serve to point to Jesus only.

It’s time to let go of pride and false security. It’s time to let go of ego and the false god of self. It’s time to surrender to the reality that Jesus is, and will always be, better than you could ever be. And the great thing is that with Jesus it’s not a competition; instead, he invites you to join his team. When you do that, Jesus wipes your record of poor performances clean and promises to always be beside you in the future.

Anyway, well done Benjamin, the Barefoot Bradman. As your father, I am officially and publicly acknowledging that you are far better than me at cricket. I’m so proud of you.

Yes, when your bowling is being smacked hard in every direction by your son, and you are left huffing and panting, humility becomes a real option :) I remember when I bought him his first cricket bat. It must been about 40 cm long!

What a great story. Humility is hard to practice with our children - well done!

Ah Werner, you were such an inspiration to me in those days of yesteryear! But now, what have you done! Told people that I play the violin!!! I haven't practiced for years... but you know... it's kind of like riding a bike. You can still ride straight although you can't do the tricks. Ha ha!

You play the violin? Must tell Duncan so you can do a special item. Maybe Benjamin can bat some balls at the same time?

I couldn't help but picture you throughout this reading. Eliezer, my little violin-playing friend of yesteryears. I remember those non-sports days. I can really sympathize with you, being a sport-less muso myself. You really bring home the truth of Jesus and what it means to be 'small' in order to come 'up' to His stature. Hope you and your family are doing well. Blessings my friend and brother! Werner