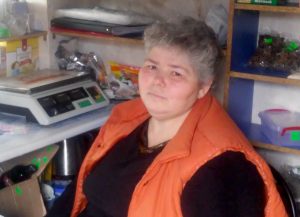 Natalia has finally found the home she always wanted!

When little Natalia saw her family crushed to death in front of her, she thought she had lost everything. But now, after a life of loneliness and loss, Natalia has found what she always wanted but never had before.

Natalia, a 63-year-old from the Lugansk region of Lutugino, Ukraine, did not have a simple and easy childhood. Her life was turned upside down one day when she was just six years old. Natalia was in the car with her parents as they were following behind a large truck loaded full of big rocks. When the rocks suddenly fell out of the back of the truck, Natalia’s parents were crushed and killed instantly. Apart from the emotional trauma of the experience, Natalia was left with a broken spine and other serious injuries. Her life was changed forever. She recalls:

I was placed in an orphanage. From the age of 6 to 14, I was bed-ridden, as the operation I needed was very expensive. But when I was 14, I was chosen to be adopted and that meant I could also get the operation. Unfortunately, the adoption did not go through. But several years later, I was completely rehabilitated and able to walk on my own again.

Natalia did not let her difficult past stifle her future. Her dream was always to build her own house. For the majority of her adulthood, she worked three different jobs, including working overseas in Italy and Greece, so that she could fulfill her dream. She says,

And my dream  came true –with my own hands I built a comfortable little home for myself.  Then when the war started in 2014, many people left Luhansk as refugees, because our city was situated right between the two hostile sides. But I could not leave because I was very attached to my place that I had worked so hard to build.

In May 2015, Natalia’s world was shaken again. By now her city had been occupied by troops, but she knew that it was usually safe to go out during the day. She and a friend decided to go to the shops. They were enjoying their day out, when:

suddenly the troops started firing and bombs started falling. My friend and I had to run and hide. After the bombing, our entire street was wrecked, and my little house that I had built with my own hands was entirely destroyed. The only place where I found in which to live was in a cellar underground near my the ruins of my house because there was really nothing else for me to do.

In September, 2015 I had major complications with my diabetes. I went into a diabetic coma. I don’t know how it happened or who helped me, or even how they crossed the army lines, but when I finally regained consciousness after ten days, I was in Poltava. I was alive again, but I had nowhere to go or live.

Natalia is thankful that God heard her prayers for a home.

Natalia slowly began to pick up the pieces of her new life circumstances. She started going to a Christian church, although she was very timid at first, At this church, Natalia was approached by one of the pastors and he asked her if she needed anything.

As a result, a lady from the church invited me to come and stay with her, and I am still living at her place. I was also given some work in a shop.

I attended a Gospel program supported by Good News Unlimited, and I decided to be baptized. Before, I had always seen the imperfections of people who said they were Christians, and I was turned off by the gospel. But the Lord has helped me very much by showing me that everyone has imperfections and we are all in need of him.

There are certainly times I find myself wishing I could go back “home” to my house. I still have many needs, especially for ongoing treatment for my diabetes. But it is so amazing the way God has worked in my life. I prayed to have somewhere to live, and I prayed to have a job, and the Lord has provided for me, even though I am an old, ill refugee. I prayed to have friends and fellowship to support and encourage me, and now I have wonderful Christian brothers and sisters.

Since I was young I have always been alone, and most of all, I have always wanted a home where I could belong. Now God has provided me with a true spiritual home in his kingdom, and a wonderful Christian family in my old age. Each and every time, God has always come through to supply my needs, and I am left in awe and wonder of him.