A Month in the Ministry of Pr Joseph

I give greetings to you in the love and glory of Jesus Christ our Saviour. All the four weekly services went on well by the grace of God. Week by week the new members have been joining.  Many old age people are very, very happy and glad to participate in the prayer meetings.

In our congregation there is a man who is 65 years old and he had suffered from stomach pain and nervous weakness for four days. So he was on the bed. Then his wife called me for praying about him. Then I went and prayed for him and his pains. Then next morning he got up and was doing all his work. So God has healed him from stomach pain and nervous weakness.

There is another girl who is 15 years old and possessed by the devil. She had been doing actions and speaking in different ways and running on the streets. Her parents had taken her to many places for doing superstitions and other things. For two weeks they had done that and they spent some money on it. On Sabbath day they want to bring her to the Sabbath prayer service but she is not willing to come. Then she was trying to go away from them and from the prayer meeting. They told me that she is not willing to come for the prayer meeting. So I went and caught her hand and shouted at her and made her sit in the prayer meeting and prayed for her some time and the whole congregation prayed for her on that day. Then the devil which possessed her went away from her. Now she is very fine and doing well. The whole family is very happy about it.

EYE SPECTACLES FOR THE OLD PEOPLE

I had helped the two old people who have been suffering from blindness. I advised them to go to doctor, so they went and met the doctor. So Doctor told them that they have eyesight problem. Then I helped them to buy the spectacles. Now they are very happy. 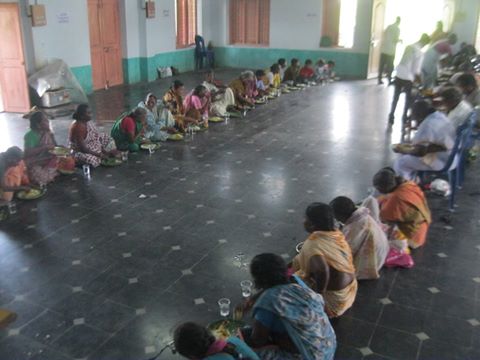 Widows and orphans being fed at the Good News Restoration Centre

PROVIDING FOOD TO THE OLD AGE PEOPLE AND ORPHANS CHILDREN

In the month of August the first week and the fourth week I had provided the food and drinks. There are 10 old age people who do not have rice for cooking, their children are not looking after them and they are left in the huts. So I have been praying to God to provide at least rice to them monthly for cooking.

On 11th of August, my son’s birthday celebration was held among the poor and old age people. On that day I had provided food for all. And there were two extra items such as chicken and the milk we had cooked with. Two pastors were called for conducting special prayer meeting.

The Holy Spirit inspired the Hindu family who accepted Jesus in their life and they have asked me to come and do the prayer meeting on every week and preach the word of God. So they wanted to learn more about teachings of Jesus. With the help of some old age people I have been conducting the prayer gathering. In their family one 17 years old girl has been suffering from the vomiting sensations for three months. They had taken this 17 years old girls to many hospitals. But no use. The Holy Spirit of God healed her from that sickness. Thank God for doing such a miracle.

There is another family who have been Christians but have no proper way of life. Their whole family is scattered. So they asked me to come and do the prayer for them now and then.

In order to spread the Good News fast in the town and nearby villages to the people who do not know more about the teachings of Jesus, this Restoration Good News Centre started on 30th of August. For this program I and another pastor had gone during one month visiting the families and the nearby villages to inform them about this Centre. So for the first prayer meeting, nearly 100 people and a few pastors had come. We had provided the food to all the people who came for the prayer meeting. So by the grace of God it went on well. I have hired a car for bringing the people in various places on that day. The people and the pastors who came for this meeting were very happy. The next meeting will be on 27th September. Please pray for it.

ONE DRUNKARD HAS CHANGED HIS WAY OF LIFE

The guest pastor whom I have invited for the Restoration Good News Centre prayer meeting, prayed for the family of this drunkard. His name is Stephin. He was going after the worldly pleasures by taking the advice of his friends. So we had conducted the family prayer meeting in his house. All his family members had come for the prayers but he did not come for prayer. So after the prayer meeting, the guest pastor asked him, “Do you believe Jesus?” Then he said no. Then we prayed for him. Next day he came for the prayer meeting and held the legs of the pastor and cried, saying, “I and my wife and children believe Jesus and no more drinking here”. Now he is very happy and not drinking. Thank God for changing the life of this drunkard. All his family members are very happy.

WE DISTRIBUTED 10 HOLY BIBLES TO THE YOUNG BOYS AND GIRLS

I and guest pastor went to the fisher people where there are some young boys and girls and we conducted the Youth prayer meeting. During that time, we gave the holy Bibles to them who do not have for years. So they felt very happy. As I have been going to the villages, there is great need for the people to have the holy Bibles. They are very poor and they are unable to buy the holy Bibles. So please pray for them. Thank you Pastor for asking me about the ministry news in India. I shall send some photos tonight to your mail.