The Sparkle of the Jesus Lens 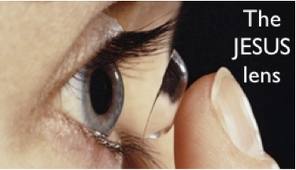 The OT scriptures gained new sparkle through the freedom and agility with which NT writers claimed, reinterpreted, and put to new service OT words and texts. For example, a psalmist had written: “Zeal for your house has consumed me” (Ps. 69:9a), and “The insults of those who insult you have fallen on me” (Ps. 69:9b). The psalmist is so devoted to God, so committed to God’s cause and so closely identified with it, that he feels God’s pain when people blaspheme or speak evil of God.

One thousand years pass, and on a certain day Jesus and his disciples go to the Temple. There Jesus discovers that consecrated worship space had been converted to crass commerce and the interests of private profit have profaned Israel’s divinely-designated place of prayer. Infuriated, Jesus “cleans house” as the apostles watch. Decades after the deed, one of those apostles named John writes a Gospel and includes this story. When the disciples saw JESUS’ zeal for the Temple, John recalls, they remembered the first clause of Psalm 69:9 that said: “Zeal for your house has consumed me.” The words had waiting a millennium for that day’s events to stir them from the depths of memory, finding their literal fulfillment in the actions of the Messiah himself (John 2:17).

The time comes when Paul writes the Christians in Rome, urging them to put others ahead of self. Can we imagine him sitting at the table dictating to Tertius, searching for just the right phrase or word, when suddenly and without effort the second clause of Psalm 69:9 comes to mind. It is as if Paul can hear JESUS saying: “The insults of those who insult you have fallen on me” (Rom. 15:3). In its NT application, its exposition by men who read through the Jesus lens, Psalm 69:9 and all the rest of the OT scripture text flowed with fresh meaning. We need not be concerned whether the poet who wrote Psalm 69 could anticipate either NT application of his verse. The Jesus lens was enough.