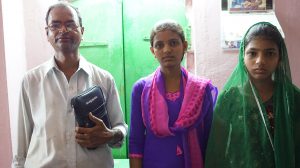 Pr Yeshwa from Gudiwada, India, has partnered with Pr Joseph and GNU to spread the Good News fast! He contacted Pr Joseph after watching the GNU TV Programme that Pr Joseph presents.

Pr Yeshwa was raised in a Hindu family. He first came to know about Jesus through someone he met while working away from home. He accepted Jesus into his life, however his family rejected him and his new faith. Praying to God for an opportunity to do his work, he left his family and moved to Gudiwada.

He was in his early thirties when he moved to Gudiwada, where he attended Gospel meetings and continued to grow in his faith. There, he met a woman who also believed in Jesus. They married and together began travelling to different villages, doing God’s work. At this time they had two daughters, Sarah and Seeresha.

However, while their daughters were very young, his wife became sick and died. But maintaining a strong faith in Jesus, he continued the ministry, with his two daughters. In addition, six years ago he began suffering from tuberculosis. His daughter Seeresha, who is now thirteen, also has the condition. Despite this set-back, the family continues to do God’s work and remain strong in their faith.

Pr Yeshwa and his daughters began watching the weekly GNU TV programme, and he contacted Pr Joseph. Now partnered with Pr Joseph and GNU, he has been travelling with Pr Joseph to various places and villages, sharing the Gospel. He has baptised over 100 people. Pr Yeshwa says,

I was left by my relatives and family members. I came to this area to spread the holy Gospel and to save lost souls in Christ. When my wife died, I thought that it must be the will and wish of God. So I kept all my faith in God and continued spreading the holy Gospel in various places. I thank Jesus for his great and marvelous call for me.