Struggling Drug Addict Stops Trying to Save Himself and Finds the True Saviour – Poltava, Ukraine 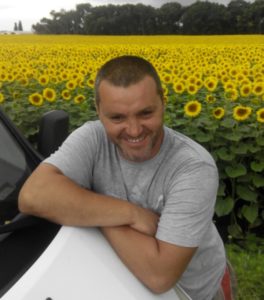 Though Vlad struggled with addictions for several years, his life was changed by the Gospel, and he is a now able to say, “I made a firm decision, and I rely on Christ’s power.”

Vlad is a man who has faced a life-long battle with drug and alcohol addiction in Ukraine, but, as he shares in his testimony, GNU played a part in reminding him to come back to Jesus once again.

When I was very young, my parents divorced, so my grandparents raised me. My mother was always pressed for time and couldn’t take care of me very well. When I was a kid and all the way up through my youth, I played football.  In 1990 our football team won the Youth Championship of Ukraine. Football was my life. My team also took part in competitions in the former USSR, but in 1991 the USSR dissolved and all sports took a backseat. For me, sport was replaced by beer, questionable friends, marijuana, and tablet drugs.

My mother noticed and suspected I was abusing alcohol and taking drugs, and she sent me away to the army. I was also stealing money for drugs and knew I was going downhill, so I thought the army might save me from myself. However, it was in the army where I started taking hard drugs – it may surprise you that about half of the people doing military service alongside me used injected drugs.

When I came home from the army, I found that one of my good friends was in the “system,” or the drug circle, as well. We started using drugs together, stealing what we could to get by.  In 2000 my friend informed the police of my illegal activity, and I was put into prison for 4.5 years. At that time, I was married and I had a daughter.

While in prison, I met a man who prompted me to read the Bible. I did, and for the first time I sensed the presence of the Lord and began praying. I started exercising, stopped using injected drugs and felt God’s presence. My wife and I were nearly to the point of divorce, but I prayed for us and she began visiting me in prison.

The man who had been Vlad’s biblical mentor in jail was released, and unfortunately, Vlad withdrew from God.  When he was released from jail himself, he turned to alcohol, but he believes that it was by the grace of God that he stayed away from other drugs. Then one day in 2007, about 5 years later, Vlad met up with two of his old friends. They asked if he would drive them into town for an errand.

What was supposed to be simple drive landed us at “the Point,” a place known for selling and trading drugs. I was offered drugs and took them. For a while, I tried to control myself and only used about once a month, but eventually, that wasn’t enough and I fell right back into the “system.”  At that point, I made up my mind that I would undergo medical rehab for my addictions.

Vlad remembers a particular day he spent walking around the forest and reflecting on his life. At this time, he had been involved in a drug rehab program for some time, but decided he was all right to stop treatment and progress on his own:

And then three weeks later, while I was trying to make it on my own, my progress came to the end. I stopped praying, began doing what I shouldn’t, and I lost my relationship with God. It went on that way for several years. I started using marijuana and drinking alcohol even more heavily, but I did not sink back into the “system.” Somehow I was working and earning honest money. However, in my soul I realised that this was not a real life.

I started believing that God would never forgive me. So many times I remembered how good it was to be in relationship with God, but for some reason, I kept telling myself that it was fine and I’d be okay on my own. I said to myself, “I will not pray and it will be okay. If I can’t keep myself from being bad, I’ll just live with it.”

In 2014, Vlad had a moment of clarity after 6 more years of struggling with his addictions.

I needed money for my addictions, so I went to my grandmother, and on my knees, I begged her to give me money. I caught myself thinking, “What on earth am I doing? I am 35 and I cannot live a normal life. What I have done with myself?! How wretched I am!”   I began praying. The very next day I met a recovering man. He had been clean and sober for 5 years and he told me to go to a rehab centre in Poltava. The next day, I was on my way. 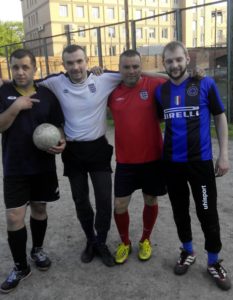 Vlad [red shirt] works on staying physically healthy after recommitting his life to the Lord.

Vlad entered the rehab programme but was still struggling in his relationship with God. At that time, he was informed about some spiritual meetings that would be taking place – the gospel meetings held my GNU’s Dr Eliezer Gonzalez and Dr Philip Rodionoff.

At the GNU Gospel meetings, I found peace for my soul. There was an incentive to keep attending the meetings: if you visited eight meetings, you would get the Bible. Well, I got my Bible. It was the third time when I renewed my relationships with God. Once again peace filled my soul.

After being sober for 7 months, Vlad found that he was in danger of losing his way.  He wanted to keep his commitment to God. Thankfully, God placed people in Vlad’s way who helped him to keep focused.

While under clinical rehabilitation, I ran into two of my former fellow prisoners on the same day. I met the first one in the morning. I went outside, and beside me I saw an old man wearing glasses. He was thin and looked very ill. He asked me, “Your name is Vlad, isn’t it?”  The man was actually about my age. It was Sasha, a fellow prisoner who was still an addict. I thought, “God, this could just as easily have been me!” It opened my eyes.

Later that evening, I heard the same, “Your name is Vlad, isn’t it?” It was another fellow prisoner whose name was Yurii. He had been in jail even longer than me– for 12 years– but now he was a Christian. He had a family, was a father of two children, and looked full of energy and of the joy of life. I thought, “Lord, if it can happen with him, it can happen with me, too.”

Vlad remembered what he had learnt at the GNU gospel meetings, and started attending a Christian church with Yurii. All throughout Vlad’s life, he had tried to save himself by earthly means. Now he has found true salvation that will never leave him empty again. He says,

Now my eyes have truly been opened, and I have been baptised. My relationship with my wife is getting stronger, though personally, I still have much to work toward. The best thing is that I am with God, and this time, it is forever.