Teaching by the Sea – A Once in a Lifetime Experience! 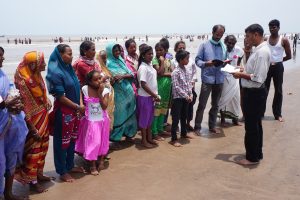 Pr Joseph sharing the story of how Jesus calmed the sea with the villagers who had never seen the ocean.

These poor Indian villagers recently went on a once-in-a-lifetime excursion they will never forget!

Duncan Wood and I recently spent time ministering with Pr Joseph Usala in some poor villages in his region. In each village, Pr Joseph has established a congregation of believers. We went from village to village, preaching and encouraging people in the gospel. The villagers praying together on the shore.

You see, although these people live an hour and a half by car from the sea, they are so poor that they have never travelled such a large distance. They are born, they live, and they die in their villages. When I heard that, I offered, on behalf of Good News Unlimited to sponsor a special excursion for the believers in that village to the sea, so that they could have transport, and a picnic by the shore of the Bay of Bengal.

It was on one condition – that once there, Pr Joseph share with them once more the story of how Jesus can calm the storms upon the biggest seas, and every storm in our lives. They heard about how Jesus is Lord over wind and wave, and Lord of All because of Calvary.

Pr Joseph tells me that the people were overjoyed to see the sea, and that they all stood there and praised God when they heard the gospel preached to them once more. Our Lord loved to teach by the sea, and now these people experienced that blessing also.

Let us praise God for the things we take for granted, for the faith of these wonderful people, and the message of gospel that saves us all.