The Invitation for All to Come – by Desmond Ford 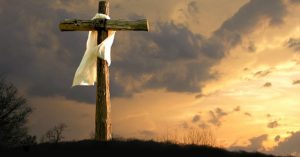 Christ died under the open expanse of heaven, not under a roof or in a temple. Thus it was symbolized that he became a spectacle to all, including the angels in heaven, that he suffered not only for the Jews but for the whole world. He was suspended in the air and his blood drops moistened the earth, symbolizing the cleansing of all creation.

Outside the city Christ faced west where his gospel would soon spread. There was a thoroughfare nearby representing the earth in which earth’s pilgrims are confronted by the cross as they journey through life. Most pilgrims mock, but some observing the One on the cross confess, “Surely this is the son of God” (Mt 27:54).

Calvary at Jerusalem is the very hill of Moriah where Isaac was offered up centuries before. Remember that the child of promise miraculously born was under the sentence of death for three days, and traveled with his father bearing on his back the wood on which he was to be sacrificed. Now the true Isaac has come, and to show that, he is offered at the same site. He too can say, “The Father has not left me alone. He that sent me is with me.”

Long before Isaac, Noah had offered sacrifices adjoining the saving wood of the ark after emerging from the storm of the wrath of God. That sacrifice had been the symbolism of a new covenant made with a new world. So it was at Calvary. The fierce outpouring of divine wrath against evil fell on the One attached to Calvary’s tree that it might never fall on us.

God’s wrath, of course, is not like ours, selfish and ungovernable. His is a holy wrath, the inevitable reaction of holiness against evil, and it is a healing wrath that brings salvation and holiness to all who are in sympathy with it. Whenever wrath threatens, there is the ark of safety available to all who accept the invitation to “come.”