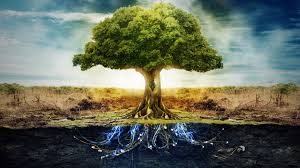 Back in the Garden of Eden, under cover and in the disguise of a serpent, God’s arch enemy sold Adam and Eve a lie that all humanity has bought into ever since.  Most have swallowed the lie hook, line and sinker like baited fish unaware that they are being reeled in by a knife-wielding predator. What is it that all of us, including many Christians, have bought into?  Coming straight out of the mouth of the lying serpent is the notion that what God has forbidden is actually what is holding me back from fulfilment and happiness. This is an unspoken belief, that away from God there is a more abundant life to be had. Here is how the lie unfolded in the Garden of Eden: Eve said to the serpent, “We may eat fruit from the trees in the garden, but God did say, ‘You must not eat fruit from the tree that is in the middle of the garden, and you must not touch it, or you will die.”  Not so says the serpent!  “You will not certainly die…”  Gen. 3:2,3

It is supremely important to note that the very first thing the serpent did was to lead Eve away from the Tree of Life and to focus her attention on the tree of the knowledge of good and evil. To this day the deceiver does his best work when he focuses our attention on anything and everything else rather than on Jesus Christ in whom alone is life eternal.  Much of misguided Christianity will exalt their rituals around the tree of knowledge rather than lead you to worship Jesus around the Tree of Life.

Eve bought the line that there is more to life than what is on offer by eating from the Tree of Life with God. Adam and Eve thought that there would be more pleasure, more wisdom and more happiness in the forbidden zone. They suspected God of holding back from them a way of greater enlightenment and greater knowledge.  Little did they know that what God was holding back were torrents of misery, pain, suffering and untold grief.

Satan, the serpent keeps marketing his lie that there is more life to be had by following his encyclopaedia of so-called enlightenment. The world as we know it is a darker, sadder and more desperate place by the day as a result. Don’t believe him! It took Jesus to restore to us that which Satan stole. It took Jesus to lead us back to the Tree of Life.

Blessed are those who wash their robes, that they may have the right to the tree of life and may go through the gates into the city. (Revelation, 22:14)