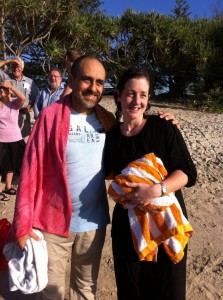 I received a phone call last year to visit Sara. She had grown up in a church, been baptised in her early teens but had never understood or experienced the gospel. She had left the church in her teens. Now, many years later, she was in deep trouble.

When I visited Sara I found a person in great distress, who could not even look us in the eye and would not shake our hands. She knew she needed Jesus but didn’t know how she could come home.

We spent a long time showing her the love of Jesus through the gospel and praying for her. At the end of that first meeting we saw Sara smiling for the first time, and as we left, she shook our hands. It’s been a long journey for Sara. This is her powerful story…

Just over a year ago I collapsed into nervous breakdown. In a state of psychological fear and pain, mental anguish and confusion, I thought that I would die or take my life. I fell into the black hole. I was diagnosed with psychosis and the future did not look good – sedative medication, hospitalisation in a psychiatric unit and constant probing and reviews by well meaning doctors.

I didn’t get to the point of psychosis by behaving myself- the pain, confusion and loneliness that I had suffered in childhood, was soon well covered with a promiscuous and carefree lifestyle. The immorality I had thrown myself into was wrong and I knew it. I kept saying “that was bad I won’t do that again’ but it served just like any other addiction- it was a band aid – an escape from pain. Bandaids on big injuries don’t help, they make them fester.

As soon as I broke down I knew I needed God, the problem was too big for me. That is all it took, I needed to admit that I couldn’t help myself, and medication would not make me better. I realised I was alone and naked before God. I called on God. In desperation I asked mum if there was anyone who taught Gods Word Alone – I mean The Bible Only…this is when she told me about Des Ford. I looked up his sermons online and it was not long before the truth about man, sin, and Jesus was revealed in my soul. I knew Jesus was ALL I NEEDED. Des said, “Anyone can come to Jesus- it doesn’t matter who you are or what you have been like- you can come just as you are – but he won’t leave you just as you are.” This was the Good News I needed – not just forgiveness but healing. 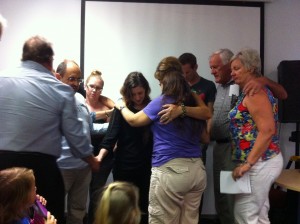 I had also been reading Spurgeon, whose preaching cut like a knife. I was terrified in a new way – terrified not to have Jesus, never to know Him and never to know His love. I prayed and I prayed and I prayed. I made the decision – I would rather die than not have Jesus. The good news is that I found Him, He was there all along, but now He had my heart – and my undivided attention. Taking my pain and suffering to Him, led me to His suffering. My pain was lost when I saw Him suffering. I am not saying that I don’t feel any pain now, but when I take my pain to Him and see the cross and believe in His broken heart for me and the world He made in love, my pain dissolves and I am comforted in the power of His love.

It was not easy to face the ugly truth that is inside me, but Jesus said “Blessed is he, whosoever is not offended in Me” The truth about me is very bad, and Jesus says it how it is. But the truth about Jesus is very good – better than anything. Gentleness and humilty as I have never seen, love- relentless love, stability and unshakeable faithfulness, calm control, arms that never let go, ears that always listen, a heart that forgives, and is endlessly giving. Everything I have ever needed is in Him. 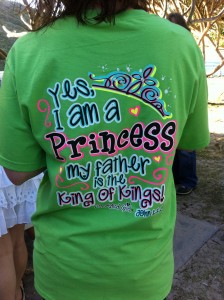 The only thing between us and our Creator is sin. I have committed a lot of sin, but on The Cross, Jesus actually died as sin. “He was made sin for us” He died as sin – and it certainly did not rise up with Him. It is finished. So with nothing standing between us, I must take Him at His word and trust in His Faithfulness. I am going home through Jesus my Lord. To doubt this truth and live in doubt is to slap Him in the face. He died to make man free, and if you are not free in Him, you need to see God suffer and die.

Look to Jesus and see your Creator die, see your sin finished and Jesus rise with His love for you forever engraved on the palms of His hands. Seek Him, pray – pray until He is yours.

“My sheep hear My voice, and I know them, and they follow Me; and I give eternal life to them, and they will never perish; and no one will snatch them out of My hand.”

Here is a video of the actual moment of Sara’s baptism. Turn the volume up to hear it, since it was shot from a bit of a distance.