“For I desire steadfast love and not sacrifice, the knowledge of God rather than burnt offerings” Hosea 6:6.

I recently had lunch with a young guy whom I had only met a couple of times. In the course of our conversation he mentioned to me that he knew a Christian who had talked to him about speaking in tongues. He wanted to get my perspective on the topic.

I explained to him the big picture of Christianity, the development of various denominations, and some of the distinct theologies and practices that each church movement promotes. The conversation had me thinking about the use of incense in Greek Orthodox services, the Sabbath of the SDA’s, infant baptism of the Anglicans, charismatic gifts of the Pentecostal’s, the hierarchical structure of the Salvationist’s, and the lack of structure in the Brethren’s etc.

While my friend didn’t say too much, I have no doubt that he must have been thinking, “Why all the differences?” Do I need to attend church, and if so which one? Do I need to undertake Bible studies, do I need to get water baptised, do I need to move in the charismatic gifts, and do I need to forget my Catholic traditions? I think you can see his dilemma.

The Scriptures share a number of stories about people who had barriers between them and a life connected to Jesus. In John 4:4-23 Jesus is in conversation with the Samaritan woman. Even though Jesus had just prophesied into her life and demonstrated that He was the Messiah, the woman raised a theological difference between their religious cultures. Jesus cut right through the issue and stated that she needed to be in relationship with God.

Mark 10:17-23 tells the story of the rich young man who asked Jesus the big question, “Good teacher, what shall I do to inherit eternal life?” A debate followed around the letter of the law, to which the young man said he had covered. Then Jesus got to the heart of the matter and told him to give up the one thing that was blocking his relationship with God.

In Matthew 22-23 Jesus rebuked the religious and civil leaders of the day, the Herodians, the Sadducees, the scribe, and the Pharisees. Jesus said in Matthew 23:3, “Obey them…but do not do what they do, for they do not practice what they preach.” The leaders who should have been helping the people were actually hindering them. 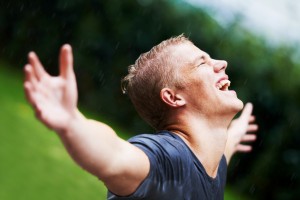 As the Church, the representatives of Jesus, we need to make sure that we are not putting up barriers between God and his children. Our role is not to create and enforce a list of religious rules and regulations for Christians new or old, we are to help facilitate intimate relationships between people and their Heavenly Father.

When an individual asks Jesus to be Lord of their life, it is the Holy Spirit that draws that person close, and influences them into making decisions that will bless their life and the life of those around them. We need to continue moving ourselves from religion to relationship. Blessings Tony.