Crowning Him Lord: Redemption and Choice – by Desmond Ford 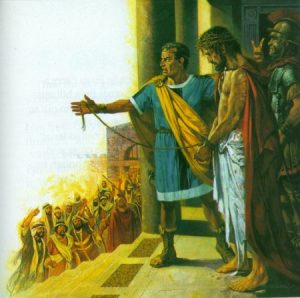 Perhaps watching the scene of Jesus on the cross with intense personal interest was the man who should have been on that central cross. How strange that the mob should have called for the guilty to go free and for the innocent to be executed! Yet that is the very enigma at the heart of the gospel.

Barabbas of all people in Jerusalem should best have understood the new teaching. He was worthy of death many times over. He had been captured and condemned and there was nothing he could do to accomplish his own release. Then, unexpectedly, almost unbelievably, had come the word, “You are free. Another has taken your place.”

Did he, bewildered, as in a dream, make his way to the place of the skull outside the city and stand and watch the drama there? We do well to think upon Barabbas, because it is not by chance that his history is found in the gospels. He represents all of us. We too are worthy of death, we too have been condemned by the law, we too are helpless to redeem ourselves. But Another has taken our place. Another has suffered in our stead. Blessed be God! When Par Laagerquist, Nobel Prize winner, wrote his novel Barabbas, he had the delivered murderer ultimately become a Christian, willing and even eager to die for the One who had been his substitute. This was a true intuition upon the author’s part. Gratitude, spontaneity, and a multitude of other motivations tell us that we can no longer live for ourselves, but for him who loved us and gave himself for us.

There are many layers of meaning in this vignette also. Pilate was forced to make a decision between the two men. So was the mob. And so are we. In every choice we either crucify Jesus and enthrone a murderer, or the reverse. There is no escaping the decision that will decide all else. Pilate’s wife was asking an impossibility when she said, “Have nothing to do with this just man.” We cannot ignore or avoid him. Either by our lives we cry, “Crucify him,” or we crown him Lord of all.

Suppose Barabbas in his cell had met the news with incredulity. Suppose he had refused to accept his liberty, thinking it was a cruel joke. Or suppose he had told the messenger, “When I become a better member of society, then I will leave this prison. When I become a better man I will feel I can accept this pardon.” Impossible! No, not impossible. Multitudes so react to the gospel invitation of grace every day. But Barabbas was not so stupid. God grant that we may not be.