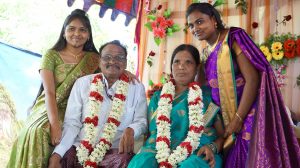 Jeevan, his wife and daughters have a relationship with Jesus thanks to the gospel message they saw on the GNU TV programme.

Jeevan and his family were not strangers to misfortune, but the messages they saw on GNU TV showed them how to pray and their lives were changed. Jeevan is wheelchair-bound after a bad accident caused the loss of his leg. He, his wife and two daughters faced many problems and often had no food to eat. His daughters desired to attend school, but without the money, they remained jobless and helpless at home.

Jeevan was not a believer in Jesus when he came across the GNU programme on TV in India. Every day he was searching for food and meaning in life.  As he listened to the word of God, he became empowered by the gospel. It was at that time Jeevan began to pray for the things he and his family needed.

One day, out of the blue, a man came and gave them some rice to eat. Acknowledging God’s faithfulness to supply his need, Jeevan continued to pray for his daughters’ financial situations. He also continued to watch the GNU programme on TV.

Week by week, Jeevan gained spiritual strength by watching this programme and praying. He asked his wife and daughters to join him in listening to the gospel messages presented by Pr Joseph Usala. What happened next proved God’s faithfulness once more.

A friend of Jeevan came and told him he planned to go to school and that he wanted to bring Jeevan’s daughters along with him — all expenses paid.  Jeevan thanked Jesus and his faith was increased. 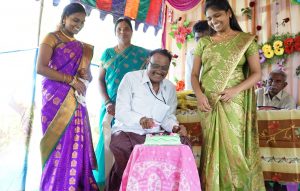 Jeevan’s family celebrate his 60th birthday. They have a new lease on life now that they know Jesus and his love for them.

Since that time, one of Jeevan’s daughters has studied and become a nurse, making a steady income. Jeevan’s other daughter was married and also found love and security for her life. God worked miracles for these new believers as they allowed their faith in Jesus to hold a supreme place in their hearts. Jeevan says:

I never knew about Jesus. I had so much disparity about losing my leg and my family members cried for me for months. But it is Jesus who heard my prayers and my family members’ prayers. It was the gospel message on the GNU TV channel which changed my family’s entire life. Now we are so happy in Christ Jesus. I am very thankful to Jesus for everything he has done.