Just take a look at this old fellow! 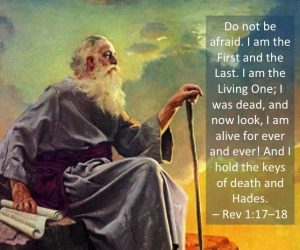 He had been a young man helping his father fish when Jesus had stood on the shore and called him to follow him. He had travelled with the Master for three and a half years, slept under bridges and out in the open with him at times. He had snuggled against his breast as Jesus had taught them around the fire.

And after the Master left, for so for many, many decades, John had set about doing the work that Jesus had asked him to do. To be a fisher of men. To be a pastor of his sheep. Because he knew that he would soon see Jesus again.

But now, he was an old man. A very old man. He could only look back at his life and wonder. Let’s face it. We all wonder. We all have doubts at time. Like that other John… John the Baptist. So John the apostle looked back at his life. Yes Christianity had grown, but Jesus hadn’t returned. Now he feared that he would die and he would not see Jesus.

As he looked around him, he saw his fellow believers persecuted on every side. They were being imprisoned and slaughtered everywhere, and still, Jesus did not appear.

And had his life been a success, or had he failed? Was his service acceptable to God? And as he looked at his own life, all he could see was his own unworthiness. How often had he failed to live up to the standard of love of the One with whom he had walked so long ago! Now he himself was a prisoner in the penal island of Patmos, where he would probably die.

Would Jesus fulfill his promise? Would he see Jesus again? And if he did, how would Jesus consider him? After so many decades of toil, the old man John was wracked by doubt. He encouraged the others to endure? But could he hold on?

And so one day, John is sitting thinking about these things, and we pick up the story now in his own words in Revelation 1:9:

I, John, your brother and companion in the suffering and kingdom and patient endurance that are ours in Jesus, was on the island of Patmos because of the word of God and the testimony of Jesus. 10 On the Lord’s Day I was in the Spirit, and I heard behind me a loud voice like a trumpet, 11 which said: “Write on a scroll what you see and send it to the seven churches: to Ephesus, Smyrna, Pergamum, Thyatira, Sardis, Philadelphia and Laodicea.”

What would you do if you heard a loud voice like that, when you thought you were alone? You’d probably jump out of your skin like John did, and turn around!

12 I turned around to see the voice that was speaking to me. And when I turned I saw seven golden lampstands, 13 and among the lampstands was someone like a son of man, dressed in a robe reaching down to his feet and with a golden sash around his chest. 14 The hair on his head was white like wool, as white as snow, and his eyes were like blazing fire. 15 His feet were like bronze glowing in a furnace, and his voice was like the sound of rushing waters. 16 In his right hand he held seven stars, and coming out of his mouth was a sharp, double-edged sword. His face was like the sun shining in all its brilliance.

At this point, John fell down, struck down by awe

But now something happens that completely changes this story.

Then he placed his right hand on me and said: “Do not be afraid. I am the First and the Last. 18 I am the Living One; I was dead, and now look, I am alive for ever and ever! And I hold the keys of death and Hades.

The touch. John recognized the touch, and recognition flooded through him.

You know, as I have spoken to people, people who love Jesus, one of the things I have heard over and over again is fear of how they will face Jesus when they meet him face to face, when he comes again.