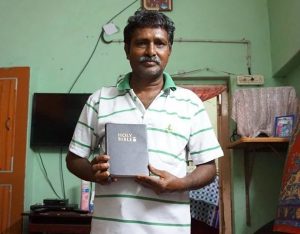 Raju holds his new Bible, joyful to have found the Gospel.

Raju was at home, watching TV, when someone told him about Jesus for the first time.

Raju had been raised as a Hindu in a family that had been Hindu for many generations. He had been experiencing many problems both with work and his family. This had taken away any sense of peace in his life.

But as he was watching TV, Raju came across the GNU TV programme. Hearing the message being presented, he saw hope for his life. He began watching it weekly and also attended the Gospel Evangelism meetings that were held in his hometown of Gudiwada, India. Surrounded by hundreds of other people from his community who were also attending, he learned more about Jesus. There he was also given his own copy of the book Jesus Only.

After the meeting, he continued to watch the programme on TV, and began to read the book. He also met with Pr Joseph, and shared his story. Pr Joseph prayed for him and his family and gave him a Bible.

Raju and his family have now accepted Jesus, and are overjoyed at the impact he has had in their lives, and the peace they now have.

The GNU TV programme changed my life and my family’s life. The Gospel evangelism meeting strengthened me in the love of Jesus to accept him fully in my life. So I am so very thankful to Jesus for everything.