How to Interpret Scripture — Part 1

How to Interpret Scripture

What are those dark, swirling clouds in the distance? Is it a hurricane? A forest fire? A stampede? A sand-storm? Or a locust plague? What is that gnawing pain in your stomach? Indigestion? Stom- ach ulcer? Hunger? Or could it be cancer? Apart from the very little we know instinctively, everything else must be interpreted. The whole of life, from conception to death, consists of making interpretations and applying the knowledge we have learned from our interpretations.

Most people manage, without too much difficulty, to correctly interpret the minor events of everyday life. But the more complex problems, such as a chronic gnawing pain in the stomach, or an unusual long-term change in the weather pattern, require an expert’s interpretation.

Now many of us would like to be expert at something, so let’s ask ourselves, ‘How can a person be an expert interpreter? What enables the doctor and the weather-man to interpret the symptoms or signs in their work better than we can?’ Surprisingly enough, the answer is quite simple. Experts, or professionals, have been trained to recognize patterns in their work.

The work of scientists and professional people everywhere is based on the belief that the whole of life operates in patterns. We see these patterns in the daily sunrise and sunset, the lunar pattern from new moon to full moon, the seasonal pattern of spring, summer, autumn and winter, the pattern of the tides, the patterns in crystals and laws of motion, and patterns in behaviour, such as grief, etc. Without patterns, life would not only be unintelligible, it would be impossible.

We live in a universe of patterns, and life only makes sense as we are able to understand these patterns. A person who is unable to detect anything but the most elementary patterns of life is called a moron, while the person most adept at discerning patterns is called a genius. Your ability to detect patterns is called your intelligence quotient, or I.Q. What to one person is a meaningless mixture of facts or figures, is to a more intelligent person an exciting pattern.

Discover the pattern and fill in the blank spaces in this puzzle:

Even such a simple game as naughts and crosses depends on the ability of each player to programme a pattern of three naughts or three crosses in a row. You can’t play naughts and crosses with a monkey, because a monkey is not able to recognise patterns of this kind. Every field of science, whether it is mathematics and logic, the physical sciences, the biological sciences, the social sciences, or the science of redemption, has its own special patterns. Thx rxal diffxrxncx bxtwxxn a laypxrson and an xxpxrt is that thx xxpxrt has bxxn trainxd to rxcognizx pattxrns in his or hxr particular fixld or profxssion.

Don’t let the pattern in the foregoing sentence obscure its message. If you wish to become a skilled interpreter you have no choice but to train yourself to recognize patterns in your particular field(s) of interest. This set of studies, while dealing with only the most basic patterns of prophecy, will give you a foundation on which to build your own research in this exciting field.

EVERY PATTERN HAS A KEY 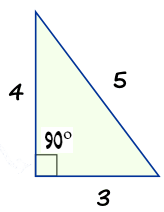 When I was a young lad I remember helping my father, who was a builder, to lay out the foundation for a garage. With his tape measure he measured off three units along one side from the corner, four units along the adjoining side from the same corner, then adjusted the angle between the two sides so that the third side of the triangle was exactly five units. He knew then that the building would be square.

It doesn’t matter what units, or multiples of units are used—whether feet, yards, metres or cubits—the result is always the same if the formula is adhered to.

I didn’t find out until many years later that builders have been using this ‘magic 3-4-5’ triangle for at least 4000 years. The Egyptians were using it two millennia before Christ to square the foundations for their pyramids.

About 500BC Pythagorus, a Greek mathematician, discovered the key to this magic triangle. He found that in every right-angle triangle, if you added together the squares of the two sides that make the right angle, the total would equal the square of the longest side (the hypotenuse), e.g.
3 x 3 = 9
4 x 4 = 16
5 x 5 = 25.

Now that Pythagorus has given us the key to this magic triangle we are no longer restricted to the figures 3. 4. 5, or their multiples. With his formula (a2 + b2 = c2) it is now a simple matter to work out the length of the third side of a right-angle triangle if we are given the other two. For example c2 – b2 = a2, or c2 – a2 = b2.

One rewarding aspect of true science is that a scientist is able to make sound predictions on the basis of a key to a pattern. Dmitri Mendeleev discovered a key to the natural elements and was able to predict the existence of certain basic elements some time before they were discovered in nature.

In the 1860s Mendeleev discovered that the natural elements, such as aluminium, copper, silver, mercury, etc., formed a definite pattern on a chart when entered in the order of their atomic weights (a more accurate key, discovered later, is the atomic number of each element). For example, gold was entered next in line to platinum because it was the next heaviest in atomic weight, and so on. The vital key was the atomic weight of each element. After entering the eighty-eight known elements, he finished with several gaps in his chart.

Having identified the pattern and its key, Mendeleev found it a relatively simple matter to predict the atomic weights of the missing elements. His predictions were proven true, and the gaps were filled by the discovery of gallium in 1875, scandium in 1879, and germanium in 1886.

Now what is true in the physical world is also true in the spiritual. Two millennia ago Jesus used the known physical world to explain the unknown spiritual world. For example, a fisherman sorting his catch into good and bad piles pictured the Final Judgement (Matt. 13:47-50). A hired man who ploughs up buried treasure and then sells everything he has in order to buy the field so that the treasure will be his, portrays a person who discovers the good news about Jesus and gives up everything that prevents him from having Jesus (Matt. 13:44).

THE FOCAL POINT OF ALL PROPHECY

Jesus is the key to all Old Testament prophecy. The whole of the Old Testament points to him (Luke 24:27, 44). The major purpose of all prophecy is to turn us to belief in Jesus. If prophecy does not establish our belief in Jesus we have misunderstood it. In John 13:19 Jesus said, ‘I am telling you now before it happens, so that when it does happen you will believe that I am he.’ ‘For no matter how many promises God has made, they are Yes in Christ’ (2 Cor 1:20). It is through Jesus that the promises of God are fulfilled to us.

There are several different types of prophecy in the Old Testament that point to Jesus:

This particular study will concentrate on Typical Prophecy. Typical prophecy has two basic sub groups: One group deals with the inanimate types of Jesus, and the other with the animate types.

Some of the inanimate types which pointed to Jesus were:

Some of the animate types that pointed to Jesus were:

The following are examples of typical prophecy. The lives of these people were recorded in Scripture because they were prophecies of the Coming One, Jesus.

His name means ‘the beloved’. He was born in Bethlehem. He was a good shepherd who became king. He was sent by his father to the place where God’s people were engaged in a life-and-death struggle with the enemy. Without special protection, or supernatural weapons of any kind, he there fought with the giant of evil who had been flinging taunts for forty days. He attacked him, not with sword or spear, but in the name of the Lord, and destroyed him with his own weapon (Heb 2:14). He is a mighty warrior who never lost a battle. Of him it is written: ‘Why do the nations rage … against the Lord and against his anointed One’ (Psa. 2:1-2; Acts 4:25-26).

As we have seen, the key to the interpretation of Old Testament prophecy is Jesus. Several examples have been given. One of the most remarkable types of Jesus, however, is Jonah. We challenge you to discover the parallels between Jonah and Jesus for yourself. If you so desire, email your script to me [email protected] . We will compile a list of parallels from the best types sent in and publish it in the magazine.

Jesus claimed that the Old Testament sanctuary was a prophecy about him (John 2:19-21). Next month we will look at the Hebrew sanctuary to see in what way(s) it pointed forward to Jesus and his ministry.