Jesus Walks in Prison – The Story of a Former Inmate 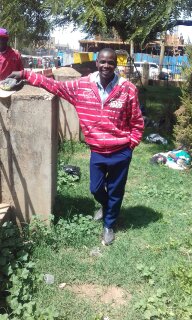 Hassan has been pardoned by the president, but the pardon he values most is the one he has received from God.

Hassan Omari is a former inmate who met Christ through the Ministry of Evangelist George Ngatia, GNU Prison Ministry representative in Kenya. He was charged with theft and sentenced to 3 years imprisonment in 2013. Prison gave him time to reflect on his sins and possible ways of correcting himself. It was during these moments of soul anguish that he heard about the free forgiveness of all sins found in Christ. His perspectives on Christianity were gradually altered as he listened to daily devotions offered by the Prison Chaplain. Initially he had been taught that Christianity is as a movement of Kafir (unbelievers). Hassan Omari would later convert from Islam to Christianity few weeks before he received a presidential pardon on 20th November 2016.

Hassan is now a changed man. In prison he learnt masonry, a skill which he now uses to earn a decent living. He is also a regular church attendant. At his work place he keeps a KJV Bible which he loves to read every time he is free.  Hassan Omari is grateful for GNU ministry in Prisons. He says “Christ visited me in the prisons through the work of GNU and gave me hope. It is because Christ forgave me that the president pardoned me when I had served only 2 years”