On a weekend at the coast with my teen-age friends we debated whether or not to wear our swimmers under our clothes, since the weather was cool. One of the group saw wisdom in it and immediately pulled his jeans on over his swimming shorts. But then, the youth who had first suggested it winked slyly at me and began to talk as if he thought it was a bad idea after all. “No,” he said, speaking as if to no one in particular, “we can easily get changed when we get there.” 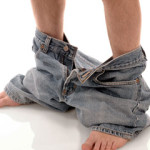 At this, the guy who had been quick to put jeans on over his swimmers paused in the middle of doing up his zip.  “Of course,” he said, I see what you mean.” And then he slipped his trousers down and removed his swimmers.

By now, the boy with the sly wink and a ready supply of ideas had started to show signs of broad amusement. “See how many times I can get him to change his clothes, “he whispered behind his hand to me.   Then he began again:  “What am I saying?  No, that won’t do, let’s put our swimming gear on now.  It will be much quicker to shed our Levis when we get to the water.”

Wouldn’t you know, he with his trousers transiting at half-mast stopped. He looked around to see how the rest of us were processing this latest proposal. We were all nodding dutifully as if to confirm that it all made sense to us. Slowly, the subject of our amusement began to change his clothes again. It all ended a few reversals later with lots of rough-house jostling and laughter.

The fact is, we care deeply about what other people think and do. We do not enjoy being the odd one out. Orthodoxy has its attractions.

Notice how rapidly the consensus on climate change has shifted so that now, those brave enough to say they are not convinced, are lampooned and even vilified.  How much more relaxing it is to remain in the middle of the herd where one can shrink down into the crowd when the cry goes up, “Crucify him!”

Christianity was a brave movement from the outset. It was seen as subversive by both religious and secular authorities. To be a disciple of Jesus was to be an outsider.

Those living under the Lordship of Christ will do what they can to support the powers that be. But when push comes to shove, they cannot justify their life habits by saying, “I was only following orders.”  Or, “What would people think?”  Being a Christian means being open to the will of the living God; following the Lamb wherever he goes; ready to obey God rather than men.

Courage of this kind was a feature of early Christian communities, and of the church of the Old Testament. Wherever men and women have been clear about their prior allegiance to God as opposed to authorities of state, church or public opinion, wonderful changes for good have been wrought. The world has been helped, humanity lifted. God grant us the courage to ignore, when necessary, our need to be liked. And to hear him speak to us these words: