Oleg: Thankful for your prayers 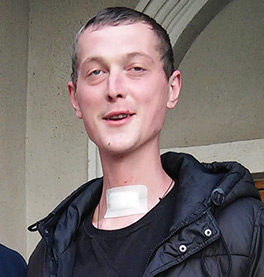 You may remember the dramatic story of how Oleg escaped from the front lines of the war in East Ukraine and came to know Jesus Christ as his Lord and Saviour. Oleg also has had his operation for cancer at the base of his throat, and is making a full recovery.

It has been a bumpy road for him, since he had to travel three times to Kiev before he could have the lifesaving operation. The first time he didn’t have the right paperwork, and the second time he was diagnosed with diabetes, which needed immediate treatment. The operation was finally performed on his third trip to Kiev.

Oleg was baptised in March during Philip and Eliezer’s evangelistic meetings in Ukraine.

He sends his thank you to his new Christian family around the world for the prayers and assistance he has received. Without the help of friends like you, he could never have had the operation for the cancer, which is not expected to recur.