Saved from the Scorpion and the Rice Factory… Narsei Yesabu 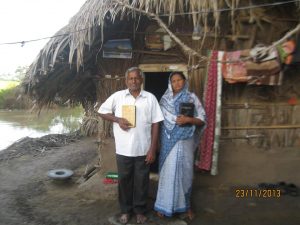 Narsei Yesabu was a Hindu by birth, and his whole family had always been Hindus. Narsei was deeply into Hinduism, like everybody else.

Narsei’s elder brother’s wife was superstitiously worshipping the trees and stones and snakes and tying threads around her hand. One day she fell sick, and one of the church-going believers from her village came to her and told her that if she would believe in Jesus Christ, she would be cured of her illness. She began believing in Jesus and started going to church, and her sickness disappeared. So she accepted baptism and started to tell her whole family about Jesus Christ.

Some time after this, his family pressured him into marrying a Hindu woman who did not know about Jesus Christ at all. At that time he also started working in a rice factory. One day, his eldest daughter said to him, “Dad, your hand is bleeding. What happened to you?” Narsei said to her, “What are you talking about; my hand is fine.” She said to her father, “Yesterday I dreamt that your hand was so badly wounded in the factory that it was about to be amputated, and when I looked at it now it looked to me the same as in the dream.” The very next day, Narsei’s hand was badly wounded in the factory and the first doctor wanted to amputate it, just like in his daughter’s the dream. But by the grace of God, it was only very badly broken, and it was able to be saved.

Slowly, God also changed his Hindu wife’s heart and she also believed in Jesus and accepted baptism. Both of them have doing God’s work in and around Andhra Pradesh, in India. Today Pastor Narsei is 64 years old.

Pastor Narsei and his wife are very humble people and they live in a hut. They preach the gospel, and Pastor Narsei also has the gift of singing. They have two daughters who are married. Please pray for them.

The photo is of Pastor Narsei and his wife holding their Bibles outside their home.