Early on the first day of the week, while it was still dark, Mary Magdalene went to the tomb and saw that the stone had been removed from the entrance. – John 20:1 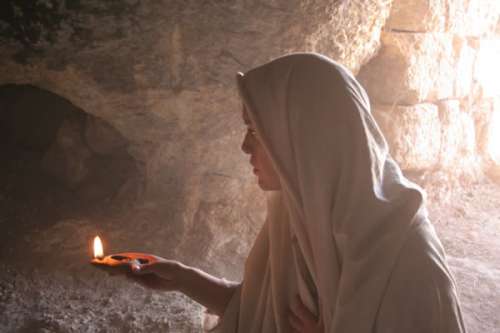 Jesus had surprised her with his love at least seven times before (Luke 8:2), and she became one of his most devoted followers. Whether Mary Magdalene was the woman who anointed Jesus’ feet with oil in the house of Simon the Pharisee is disputed, but I can well imagine her doing this. She loved the Lord more than life itself.

She is the first person at the tomb that Sunday morning, and when she arrives she finds that the stone has been rolled away and Jesus is gone. And so she runs back to the disciples and tells them, and as a result Peter and John run back to the tomb to see for themselves.

It is evident that Mary ran back with them. It just wouldn’t do for the apostle John to record that he was beaten in the most important running race of his life by a women, would it? But perhaps that’s what happened.

And now Peter and John have gone, and Mary is left by herself outside the tomb, weeping.

As she looks again into the tomb she sees two angels, who ask the question, “Woman, why are you crying?” Now that would be impressive, wouldn’t it? To have angels talk to you. But without Christ, it means nothing to Mary.

Then Mary turns around and sees a man standing there whom she takes to be the gardener, but who is the risen Lord. And the man asks her the very same question, “Woman, why are you crying?” You see when Jesus asks you this question, “Why are you crying?” the answer is in the very question – that every reason for tears has been done away by the One who asks the question!

Mary still doesn’t recognize with whom she is speaking, until he says to her, with the same tenderness as he first said her name when he first healed her and forgave her sins… “Mary.” And that’s when she received the ultimate surprise of love…a surprise that consisted in the immeasurable victory and infinite life of the One who loved her.

Just one word… “Mary.” Insert your name right there.

That Jesus would have taken the time to reveal himself to Mary… a woman… a known sinner… at that moment thunders of what matters most to Him.

Mary Magdalene was the first to see and speak with the risen Lord. Not Peter. Not John. Not James. Not any of the others. But… “Mary.” Because she followed him the closest even when everyone else had deserted him, even lingering outside an empty tomb.

And then something amazing happens. Jesus says to her…

Go… to my brothers and tell them, ‘I am ascending to my Father and your Father, to my God and your God.’” Mary Magdalene went to the disciples with the news: “I have seen the Lord!” – John 20:17–18

Do you recognize that word, “Go”? Mary Magdalene was not only the first witness of the resurrection, she also became the very first gospel preacher. And if the word apostle means, “one who is sent,” which is precisely what it means, then Mary also became the first apostle.

A bit radical? I know. But that’s what happens when you are surprised by love.