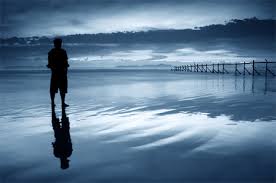 We live in a culture, at least in the West, in which there is a way of analyzing everything. Human logic is king and the walk in the unknown is so often ridiculed.

Yet, in the kingdom of God, the  “perhaps” of the children of the kingdom is God’s opportunity. That’s what we learn from the story in the Bible about Jonathan and his young armor bearer. Jonathan gets a wild idea to attack the Philistines.

Jonathan said to his young armor-bearer, “Come, let’s go over to the outpost of those uncircumcised fellows.”  1 Samuel 14:6 NIV

Jonathan was a prince of Israel, so the idea might not have seemed so crazy on the surface – but he didn’t mean that he would attack the Philistines at the head of the army. No, no! Jonathan meant that he would attack the Philistines all by himself, supported by his armour bearer who would carry extra armour and weapons for him. To add an extra dash of craziness, the Philistine army was at the top of a mountain, and Jonathan was at the bottom. Not the best strategy, is it!!!

However although it seemed totally mad, he expected that God would work on his behalf. Jonathan said,

Perhaps the Lord will work in our behalf. 1 Samuel 14:7

Jonathan knew God’s promises. He knew what God had called him to do.

There has never been a great move of God in all of salvation history that was fully and properly planned in a human way. Planning is important, but it can only go so far. All the great men and women in Scripture have acted on the Divine “perhaps” – the idea that maybe, just maybe, God would move.

In our lives, when we are facing the toughest choices, and especially when we feel the still, small voice of God telling us which way we should go, we are called to act on the Divine “perhaps.” Even if it is a choice that takes you out of your comfort zone, into life-changing ground; even if it a choice that threatens your very existence as you known it, we are called to step out and act on the Divine “perhaps.”

Read Hebrews 11, the “Faith Chapter.” This is a chapter that recites the great deeds of people who felt the call of God and said, “Perhaps God will act in our behalf.” And they took the step of faith into the Divine “perhaps.”

What are the choices you are facing in your life? If you have taken hold of the promises of God, then perhaps your “perhaps” is God’s opportunity.

Good News Unlimited has taken up this challenge. We believe that we have been called by God to go into the whole world and to play our part in taking the gospel to every human being on the planet – to Spread the Word Fast. We believe that if we do what God has asked us to do, that Perhaps the Lord will work in our behalf.