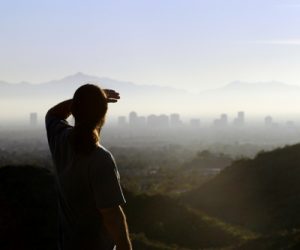 But while he was still a long way off, his father saw him and was filled with compassion for him; he ran to his son, threw his arms around him and kissed him.- (Luke 15:20).

This “seeing from afar” speaks volumes about how we are saved.

The father had obviously developed the habit of spending time scanning the horizon in hope of seeing his returning son.

The text does not say that the son saw his father from afar. Instead, it is the father who was concerned about the welfare of his son. Though the father had remained with the elder son and probably other family members, though he had hundreds of servants by his side, he kept focused on his beloved son, alone in a far off country. And he longed for his return.  Home would never be home until the return of his lost son.

Thousands of years ago, Adam and Eve walked away from the Garden of Eden to a far country. Since then, God’s eyes have been focused to the fallen world. Sometimes we try to walk back home through works of our own. But our Heavenly Father sees us from afar, and his redemptive hand reaches for us and ushers us into his kingdom.

God does not demand that we pay the penalty for our sins; he paid for our sins 2000 years ago. We were accepted back home not as servants, but as true son and daughters.

We can learn something about God’s character through this story. The loving heart of the Father cannot accept our ill-motivated works as our atonement. Salvation remains God’s initiative, however important our “walking back home” might be. Because our Father sees us from afar.