The Little Gospel for All Nations to Read – by Desmond Ford 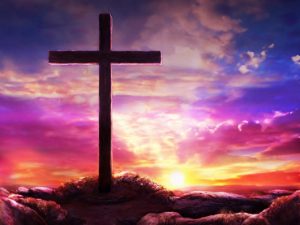 On the cross, the title “Jesus of Nazareth, King of the Jews” was written in Aramaic, Greek, and Latin. It had meaning for all, whatever their national background. The Jews have prided themselves on righteousness, and the Greeks on wisdom, and the Romans power, but Christ is the righteousness of God, the wisdom of God, and the power of God. Thus the title was a little gospel for people of all nations to read.

In the providence of heaven, all nations had met together for the Passover feast. Men and women had come from all corners of the known world. As long ago darkness and earthquake had greeted the assembled multitudes about Sinai, so it was now. Men felt they stood before the tribunal of the great God.

That which was designed by men to vanquish all Christ’s claims to kingship actually established them. From that cross he has reigned over the hearts of millions in all ages. The crucifixion sealed and ratified the eternal covenant and established on earth the heavenly kingdom. The king has come and from his Calvary throne banished the enemies of mankind – sin, death, the curse of the broken law, and those principalities and powers which war against the government of God (Col 2:14-15; 2 Tim 1:10; Heb 2:14-15).

Satan bruised the heel of Christ, but the promised Seed crushed his head (Gen 3:15). Writhe he may, but revive he never shall. All that threatens us is now under the control of our sovereign Lord. On the stormy lake of Galilee the disciples feared death by drowning, but then they saw their Master coming to them walking on the billows they feared. Everything we fear is under his feet. Hallelujah!

The title had the place of priority on the cross – high above the crucified figure. When we seek first the kingdom of God and his righteousness, then all else falls into its right place, being added to the primary blessing of membership in that kingdom which can never fail or perish.