The Non-Discriminatory Forgiveness of Christ 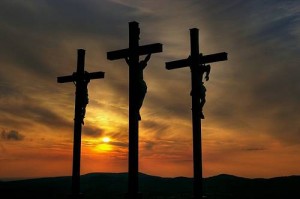 How do I love thee? Let me count the ways.

I love thee to the depth and breadth and height

My soul can reach, when feeling out of sight

For the ends of Being and ideal Grace.

I love thee to the level of everyday’s

Most quiet need, by sun and candlelight.

I love thee freely, as men strive for Right,

I love thee purely, as they turn from Praise.

I love thee with the passion put to use

In my old griefs, and with my childhood’s faith;

I love thee with a love I seemed to lose

With my lost saints, – I love thee with the breath,

Smiles, tears, of all my life! – and if God choose,

I shall but love thee better after death.

This sonnet, one of the most beautiful love poems in the English language, was written by Elizabeth Barrett to Robert Browning, whom she married. When she and Robert were married, their wedding was held in secret because of her father’s disapproval. After the wedding the Brownings sailed for Italy, where they lived for the rest of their lives. But even though her parents had disowned her, Elizabeth never gave up on the relationship. Almost weekly she wrote them letters. Not once did they reply. After 10 years, she received a large box in the mail. Inside, Elizabeth found all of her letters; not one had been opened! Today those letters are among the most beautiful in classical English literature. Had her parents only read a few of them, had they only forgiven her, their relationship with Elizabeth might have been restored.

How arrogant of us to put such conditions on forgiveness when Christ placed none on us!

Jesus was crucified with a criminal on either side. Society was prepared to forgive neither.

One thief on one side of Jesus cursed His name and mocked Him. The other thief on the other side expressed His faith in the Lord.

And on the cross Jesus stretched out His hands and held them out in invitation to both at the same time, and said, “Father, forgive them.”

Because the heart of God does not discriminate in His forgiveness.

Jesus forgave you before you were born; He has loved you from eternity. All you need do now is to accept His forgiveness, and you will be forgiven.

…And then you must pass it on.

Be kind and compassionate to one another, forgiving each other, just as in Christ God forgave you. (Ephesians 4:32)