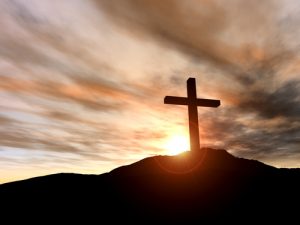 God made him who had no sin to be sin for us, so that in him we might become the righteousness of God. 2 Corinthians 5:21

People who think Jesus is, first of all, their example, think, ‘Well, if Jesus kept the law perfectly, then I must. I’ve had it if I don’t.’ I know of no more depressing doctrine under the sun than that.

The law requires that every thought should be as good, with as perfect a true sense of priorities, as Adam’s before the Fall. We do many stupid things. Half my prayers are asking the Lord to forgive my stupidities, as well as my sins. We’re addled in the head as well as the will.

But we have a Saviour who came to seek and to save that which was lost. And I’m lost! I’m like the man who falls out the fiftieth story window. He’s doomed, unless someone takes hold of him who’s going the other way! That Someone is Jesus.

Remember: From the daily devotion of 4 may , 2916. By Dr. E Gonzalez You know, reading about such words from Aman of God like you Dr. Gonzalez, proves to people like me and others that sure there is a living God , one who edifies great men of God like you. Otherwise how would you know! This is a hard question to understand, once again I can only quote from. Daniel 12:10. ' only the wise shall understand. And again the above scripture means, alot once one is able to develop a spiritual relationship with our heavenly father, there, one can begin to remember his love and his kindness. You can see, how Dr. Des Ford write the importance of the bible. And where else ca man get his spiritual nutrition, except from the Bible, and if we persist we shall endure. And we shall understand. I love the way you are guided by the holy. Spirit. Reading your writings, great men and women of God is a testimony to me. Something hard to explain Amen to your great work I will remember. Remember to pray. Remember to depend entirely on Christ's love Remember that only through Christ we shall overcome Remember that the God, who gives rain in due time will sure keep us safe. . I always get my daily devotion at midnight Danish time. And it is one hour after my afternoon work, and Iam always compelled to make a comment This what God tells servants like you. Hebrews 6:10. For God is not unjust to forget your work and labor of love which you have shown towards his name,in that you have ministered to the saints and do minister. Amen ?

Why Jesus came. By Dr. Desmond Ford Paul says in Romans 7:24. O wretched man that I am! Who will deliver me from this body of death? The Son of God came to save, a wretched man such as I. Entangled in this sinful world, where Satan dwells, but for short of time. Romans 5:18. For one man's offence. Judgment came to all men. And one mans righteous act , a free gift to all men, resulting into justification to all men. Me included. We ca only live through Christ even at the very end, jest as the robbery on the cross. Therefore endurance to the end, by trying to do what is right we make us hear these words. Well don good and faithful servant. Mathew 25:21. Watch and pray. Ok to confess our sins in order to be perfect in him. He is always around through the holy spirit. He cam to atone for our sins. Mathew 28:19-20 he overcame. Amen