The Sabbath at Calvary

If you want to see what the Sabbath is all about, then come with me to a rocky hill just outside Jerusalem.

I know it’s in the middle of a thunderstorm, and its dark, and you’ll probably get wet. I know that it’s late on a Friday afternoon, and you have a lot of cooking to do to prepare for the Sabbath, and you have to prepare all the stuff that you’ve been asked to do at church. You just have to come with me. There is something I really, really want you to see.

Come with me. Follow this path along the street. It’s not hard to find the way. Just follow the blood. It’s like a red trickle along the rocks and along the dust all the way past the city gate. You don’t like this, you say? Well, I don’t either, but you must, really must come with me.

Look at the gouge mark that follows the blood all along the way. Something heavy was dragged along here – maybe 30-40 kilos… Too heavy to carry, especially for him.

Hurry, we’re almost there. I don’t want you to miss it.

Here we are. See that man on the middle cross? Oh you want me to speak louder, you can’t hear me above the laughing and the mocking?

See that man on the middle cross. That is Jesus. Yes, it is. He’s hard to recognise isn’t He? Covered with bruises, flesh gouged out everywhere, soaked with blood, nailed up naked like that against the sky. But yes, it’s him. But why, you ask?

Just listen first. There is something I want you to hear, and then you will understand.

You wait there while the storm subsides, and the darkness clears, barely unable to force yourself to look at the horror of that hilltop. The sun will soon be setting on this saddest of all Fridays. And now, as the Sabbath was about to begin, you hear a great cry,

It was a cry that would stay with you forever. Then, it was a cry that tore your heart to pieces, as he bowed his head and died. But it was only later that you realised that in that cry, Jesus was quoting Himself on another Friday, on another sixth day, at the end of creation. And because of that, you understood that it wasn’t a cry of defeat at all.

It was a cry that announces that Jesus has finished his work, that his work is perfect. And because of it, all who will accept it have a place in his kingdom.

This is the cry that inaugurates the New Testament Sabbath! That’s the true meaning of the Sabbath in the light of the gospel –a day that, yes, has its origins in the Old Testament, but it is a day that we celebrate because its meaning is fulfilled in the New. So now we can rest.

Because Jesus changes everything. 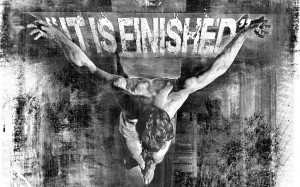