If you look in most modern translations of the Bible, you will see that John 8 is marked off with brackets, or that there is a special note about it at the bottom or in the margin of the page. This is because it does not appear in a few of the early manuscripts of the New Testament. Although scholars debate about the technical details, I believe that one of the reasons is the direct challenge that this story about Jesus poses to aspects of traditional religion. And It has confronted every generation of Christianity ever since. 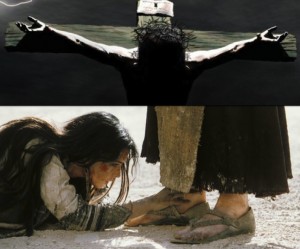 Jesus had spent his ministry mainly trying to be as far away from Jerusalem as he could possibly get, because Jerusalem was the headquarters of his enemies. But now, in this last week of his life, Jesus has come to Jerusalem. And he is teaching in the temple publicly, where he is drawing large crowds every day. The day before the events described in John John 8, the Jewish religious leaders had sent the temple police to arrest Jesus, but they had returned empty-handed, having been drawn in by the teachings of Jesus. That same day, Jesus appears to have caused a disruption to the solemn celebration of the Feast of Tabernacles in the temple, but crying out loudly, inviting anyone who was thirsty to come to him. The Jewish leaders were furious, and were determined to get him the next day, and they had accepted that if you want a job done right, you have to do it yourself.

So the next day, while Jesus is teaching in the temple, they throw a woman convicted of adultery in front of him, and they say

Teacher, this woman was caught in the act of committing adultery. In the Law, Moses commanded us to stone women like this. What do you say?­ – John 8:4–5

Now Jesus seemingly has a problem. He is known as the Friend of Sinners. If he acquits this woman he breaks the law that God gave Moses. If he condemns her he breaks Roman law that says that only Rome could impose the death penalty.

But we so often forget about this poor woman. She was someone’s princess once. And here she lies in the dust, her dreams destroyed, her life shattered, her shame exposed, without any hope at all. Whatever may have been her life, what is clear is that she was guilty. She had been caught in the act. It is one of the saddest images of all of Scripture. There she is, sobbing in the dust, at the feet of her accusers… and at the feet of Jesus.

But she was guilty as hell. Every sinner has a life story that tells you how the sinner got to the sin, but sin is sin and guilt is guilt.

What would Jesus do? He did nothing. He completely ignored the critics. He simply bent down and started writing in the dust. He didn’t give the condemners the time of day. Head down, he just kept writing. Jesus hates those who criticize and condemn. He ignores them. And there’s no more terrible place to be than to be ignored by Jesus. When you are ignored by Jesus your prayers are worthless. And it didn’t matter that these spiritual leaders were condemning this woman for the proper religious reasons. He ignored them anyway.

Religious leaders are not used to being ignored. So John 8:7 indicates that they kept pressing Jesus and insisting. And there is the Lord, in the dust, writing silently.

Finally, Jesus had had enough. We are told that he stood up. This is a dramatic moment. He raises himself up to the level of religious leaders of his nation with a look of authority in his eyes. He is about to pronounce judgment. The people in the crowd tighten their grip on the rocks. The woman tensed for the first blow. But the judgment that Jesus gave was not what anyone expected: “Whoever hasn’t sinned should throw the first stone.”

The yelling and screaming died down to silence, and then one, by one, the slow “thud… thud… thud” of rocks falling into the dust was

Those who heard him went away, one by one, beginning with the elders. Finally, only Jesus and the woman were left in the middle of the crowd.  John 8:9

She raised her tear-stained face, and looked around, unable to believe that she was alive. The religious leaders had all gone.

When Jesus had raised Himself up and saw no one but the woman, He said to her, “Woman, where are those accusers of yours? Has no one condemned you?” – John 8:10 (NKJV)

When Jesus raised himself up, I can only imagine that he raised her up as well. And Jesus saw no one but her. When you are at the feel of Jesus, you are the only object of his love and his grace.

The word for “woman” is the same word that Jesus used to address his mother. So in the midst of all watching, Jesus publicly restores her dignity. How long it had been since she had had a man look into her face and show her respect, to love her for who she was, in spite of it all, we can’t even guess.

I can imagine that ever so softly, she replied, “No-one, Lord.” And the Lord said to her, “ I don’t condemn you either.” She is free from condemnation. She has been declared righteous.

Why does Jesus then say, “go and sin no more”? Because Jesus hates sin and what it does to human lives. Not because he knew that she would never sin again, but so that she would know that when she did, she should remember this moment. Because in forgiving her, he also brought a new principle into her life, the power of divine love that would start to transform her from the inside out. To undo the knots, to heal the wounds.

By what authority did Jesus forgive this woman? Had he just fallen into the trap of the Pharisees? Had he broken the law of Moses? There was something at work here that the Scribes and Pharisees didn’t understand, that really only Jesus understood. Because when Jesus looked into her eyes, Jesus saw His own cross. Adultery, broken marriages, wrecked families, anguish, shame. In the midst of brokenness, he saw his cross.

He knew that in a few short days, He would pay the price of her brokenness and of her shame. Jesus is able to forgive with power and authority, because in the act of forgiveness, He pledges Himself to die in her place.

You have to do something.  At the very least you have to ask to be saved. At least the woman who was hemorrhaging blood, reached out a touched his garment. At least Zaccheus climbed up a tree. At least the man whose son was possessed by an evil spirit said, “Help my unbelief!” At least the thief on the cross asked.

This woman didn’t even speak a word, yet she was declared righteous by Jesus. Even when she couldn’t put her needs into words. The love and grace of Jesus zeroed in on her need like a laser beam, it zeroed in on her broken heart, and gave her what she most needed. How can that be!

The problem with traditional religion is that it has tried to regulate salvation, when Jesus established his church to proclaim the incredible news of the Gospel of grace. What then is the role of traditional religion in terms of regulating salvation, when you are facing such a Saviour? Such wild and untamed love! Such uncontrollable, such unpredictable grace! Such undefinable mercy!

Some people wait for Jesus to come to them. But Jesus has already come down to the dust. Some people come willingly and find what their heart always desired. Other people, like this woman, are brought kicking and screaming to Jesus through the most painful circumstances of life, and find an ocean of love that they never knew existed. A Saviour who is beyond their wildest dreams. It doesn’t matter how you come, just “Come.”

Praise Jesus! I love the good news of his Jesus Christ.

It's certainly a refreshing gospel message, enjoyed every bit of it.

The title is so inviting, I'm going to read for sure and then make my comment.