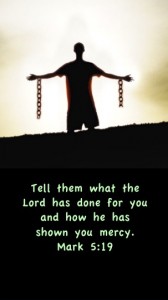 The story of how Jesus healed the demon-possessed man in the land of the Gadarenes is a really impressive one for many reasons. You find the story in Mark 5.

It is impressive because it happened after Jesus had calmed the story on the Sea of Galilee. Jesus has all power over the storms of nature and the storms in people’s lives.

It is impressive because this man probably wasn’t Jewish, he wasn’t ceremonially clean, he wasn’t wealthy, he wasn’t good, he wasn’t holy, he wasn’t fully sane, he wasn’t even dressed! He wasn’t anything. He was the last person on earth who deserved to be the recipient of the immeasurable grace of God. This miracle would have absolutely horrified the disciples and all the people who had followed Jesus across the lake in the boats that night.

It is impressive because it shows the power of the One True Lord over a legion of demons. Even they are forced to acknowledge Him as Lord of All. Why should we be afraid?

It is impressive because when the locals come to see what is going on, they find this man talking with Jesus, fully dressed and in his right mind.

But the most impressive thing about this story is the ending.

You see, the story ends with this man begging Jesus to let him climb back into the boat with Jesus, so that he can become his disciple, and follow him everywhere. He begs Jesus to let him be his thirteenth disciple.

But Jesus tells him no. He tells him to “Go home to your own people and tell them what the Lord has done for you and how he has shown you mercy” (Mark 5:19).

And this man did just what Jesus said. Mark 5:20 says that “[t]he man went away and began to proclaim in the Ten Cities all that Jesus had done for him, and everyone was amazed.” The Ten Cities weren’t Jewish. They were Gentile cities.

This man was ready. He didn’t know as much as the other twelve. He didn’t need to. He had a story to tell, and he told it. Everywhere he went through these Gentile cities he told them what Jesus had done for him and how Jesus had shown him mercy. In the gospel of Mark he is the first missionary to the Gentiles.

This man became the Thirteenth Disciple. He was way ahead of the other twelve. He became a model of how the gospel of Jesus Christ was to be shared with the nations and of how the good news of salvation was go to all the world.

And that is how from the beginning, Christianity has grown, by people who have been willing to tell their story. Christianity is not some secret clib. There are no excuses for disciples of Jesus. If you have come face to face with Jesus, you always have a story. There’s no use thinking you don’t; however humble you think your story is, you have a story. And Jesus says to you, “tell them what the Lord has done for you and how he has shown you mercy.” Tell your story.

He was ahead of his time, but now the time has come. Jesus wants you to be his Thirteenth Disciple. Tell your story. That’s how the gospel is preached. That’s how the kingdom grows. That’s the least you can do for the One who set you free. You can tell your story by posting here in our Facebook group, or by posting it on the Good News Unlimited website here:

Good News Unlimited needs your stories. The Lord Jesus needs you to be his Thirteenth Disciple.