Will There Be A Nuclear World Holocaust? 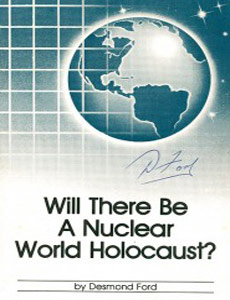 At one time there was no comparison between the strength of the USSR and your own. Then it became equal to yours. Now, as all recognize, it is becoming superior to yours. Perhaps today the ratio is just greater than equal, but soon it will be 2 to 1. Then 3 to 1. Finally it will be 5 to 1. .. With such nuclear superiority it will be possible to block the use of your weapons, and on some unlucky morning they will declare: “Attention! We’re sending our troops into Europe, and if you make a move, we will annihilate you.” And this ratio of 3 to 1 or 5 to 1 will have its effect: you will not make a move.
– Aleksandr Solzhenitsyn

In the light of this national disaster the words of Jesus, “You have heard that it was said, ‘You shall love your neighbor and hate your enemy.’ But I say to you, Love your enemies and pray for those who persecute you, …” (Mt 5:431 have to be seen not as nice little aphorisms to be framed and hung on a wall, but as urgent “life or death” imperatives to turn around and be more like God who makes the sun to rise on the evil and on the good (Mt 5:45). Had his fellow countrymen done so, there would have been an immediate moral transformation that would have depoliticized the situation and would have averted the suicidal clash with the Romans.

The times in which we are living seem to be, in many respects, analogous to that of Jesus’. Once more political and racial tensions are at a high level. Fear, lust for power, and material possessions seem to be driving the human race into a terrible conflict. Once more the simple teachings of Jesus are proving their enduring worth and relevancy.

There is, however, one aspect that is unique and not analogous to the times of Jesus. For the first time in history, mankind has the power to destroy not only the human race but also every living creature on planet earth. Since the days of Nagasaki and Hiroshima, the Christian church has carried a new responsibility which is qualitatively different from that which it bore in the prenuclear era. Frankly, if we fail to bring a moral transformation in the immediate future we may never have another opportunity to do so. The eighties may be our last chance to convince the world that the way of Jesus is the only way to peace and life.

Jesus said, “Blessed are the peacemakers, …” (Mt 5:9). In our day the lives of men like Gandhi and Martin Luther King bear witness to the powerful influence that an example of genuine love can have on society.

Would God allow a nuclear war to happen? Every man and woman hopes that God would preserve us from such a horror. Yet it is clear from a study of history that God has not intervened to save us from the folly of wars that have led to the destruction of human beings on a vast and horrifying scale of magnitude. It is my conviction that in a world where God has given human beings free will there can be no absolute guarantee that a nuclear war will not happen. In the sixth century B.C. many people in Jerusalem believed that their beloved city and temple were indestructible. Their presump¬tuous faith is reflected in Psalm 46, 48, and 132. But alas, in 587 B.C. Nebuchadnezzar shattered their smug con¬victions. They were completely baffled by the shocking events that led to their exile. Their sorrow and despair is recorded in the book of Lamentations.

In light of the history of the twentieth century, its two world wars, the Jewish holocaust, and the destruction of Nagasaki and Hiroshima, Christians cannot sit back in passivity, naively assuming that God will not permit a terrible nuclear war.

In the pastoral letter, “The Challenge of Peace: God’s Promise and Our Response,” Bishop McManus says, “Not to think morally about the morality of nuclear weapons is immoral” (p. 53). And in a powerful sum¬mary statement, the bishops write, “Faith does not in¬sulate us from the daily challenges of life but intensifies our desire to address them precisely in light of the gospel which has come to us in the person of the risen Christ” (p. 188). Dr. Ford concurs with this conviction. In the following pages he expresses his conviction that the real problem is not the nuclear bomb but the nuclear man. “You and I wouldn’t be worried if Mother Teresa was in charge of all weapons,” says the author. The bomb sym¬bolizes the fear, the aggressiveness, the lust for power that lie deep within the human heart. Knowing the power of the gospel to transform the chaotic human heart, Dr. Ford believes that it is time for Christians to make a more concerted effort to penetrate more deeply into all levels of society with the gospel.

This little book is published in the hope that many will be inspired to take more seriously their role as peacemakers (Mt 5:9) and that many troubled hearts around the world will find peace and assurance in the promise of Christ.
-Noel Mason