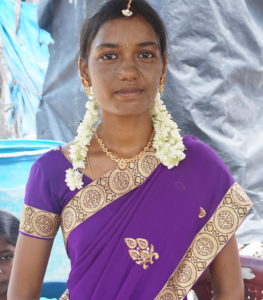 Jyothi saw her life turn around for the better after she attended a GNU gospel meeting.

In the village of Nithulapadu, India, a young woman heard the Gospel and was saved from her thoughts of suicide and hopeless life. Nineteen-year-old Jyothi was met by Pr Joseph Usala while he was evangelising in the village. Prior to this, she has been living at home after having to quit school because of family problems.

Several months ago, Jyothi’s parents began to look for a suitable partner for her and were delighted when they found a young man with whom Jyothi was also well pleased. The marriage date was set not too long before Jyothi’s parents started hearing rumours that this young man had a poor reputation and some bad habits – things they did not want themselves or their daughter to be associated with – so they forcefully broke their daughter’s engagement.

Not knowing the validity of the statements made against her fiancée, Jyothi was heartbroken when her parents called off her engagement to him. She fell into deep depression and stopped eating any substantial food for nearly four months. Her parents were at a loss for how to handle this situation.

Pastor Joseph recalls what happened as he first met Jyothi at the GNU gospel meeting:

I had gone to the village to conduct the evangelism meeting. I found out from Jyothi after the meeting that on that same day, she was planning to commit suicide, but with a heavy heart, she had decided to come and hear the gospel.  When I was done preaching, Jyothi asked me if I would pray for her, so I prayed with her and for her entire family. Her parents then told me about the big problem they were facing. 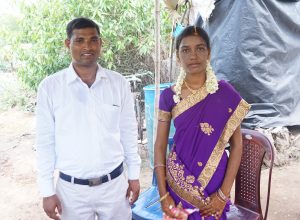 Pr Joseph Usala meets with Jyothi to pray with her and her family.

After the meeting, Jyothi experienced a surge in her faith and realised that death was not the solution for her. With some discussions and understanding, Jyothi’s parents agreed to renew her engagement, giving Jyothi even more reason to be thankful to God.  Jyothi says:

For about four months, I did not want to live, I wasn’t eating, and I was seriously depressed because my life had seemed to come to an end after my broken engagement. But it is only this gospel meeting, the powerful word of God that has changed my life and has given me strong faith to stand for Christ no matter what problems may come. I am so happy and my family members are also happy.

Jyothi is entirely thankful to Jesus for saving her through this evangelism and renewing her hope in life.