A Father’s Prayer for His Son is Answered– Gudiwada, India 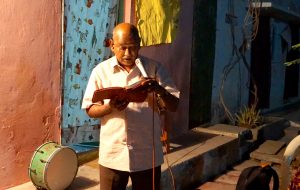 Nathanial sharing the Gospel in a village in India.

Nathanial, from Gudiwada, India, has been going to various villages, spreading the Gospel, after God healed his voice.

Although Nathanial was born into a Hindu family, when he was young his father accepted Jesus. As a young man Nathanial lost his voice and remained unable to speak. His father prayed for 7 months that he would be healed. God heard his father’s prayers and Nathanial became able to speak. Because of this, Nathanial gave his whole life to Jesus Christ and accepted Jesus as his saviour. At this time he was doing business but he gave up all his business and began doing God’s work.

Though his age is now old, Nathanial still travels to various villages, continuing to spread the Gospel. His whole family has also accepted Jesus into their lives. He is so happy now and his family is too. He says,

It is Jesus who healed me and gave me a speaking tongue. Jesus heard my father’s prayer and now I have dedicated my whole life to Jesus. Because of Jesus I am so happy now and I have been teaching about Jesus in Gudiwada town. I give thanks to Jesus.