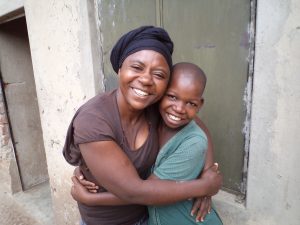 Hadija and Millena are thankful and joyful in life.

Bursting with joy and gratitude, 11 year old Hadjia is a shining example of how Christ calls and saves His own despite the fiercest opposition.

Hadjia was born into a Muslim family in a small Ugandan fishing town on the shores of Lake Victoria. At age five, she began secretly attending church, stirred by the singing she heard coming from the church near her home.

When her father found out he told her to stop, saying he would beat her should she disobey. She chose to endure the weekly beatings rather than stop attending church.

When Hadija was seven her world was shaken when her mother died and her father quickly relocated to live with his new wife. As young as she was, Hadija bravely searched for another church and continued attending Sunday school.

Filled with peace and joy

“I became saved in the church there,” she shares. “That day when I received Jesus I became full of joy. I was very happy and felt peace in my heart.”

When he discovered where Hadija had been on Sundays, her father would hit her with a cane and deny her food. Hadija endured the abuse and hunger rather than give up the joy she had found in the house of God.

Hadija’s requests to the pastor for food following the Sunday services brought her situation to the attention of church members. Mellina, reached out to Hadija. “I was intrigued and befriended the young girl and gave her food as we talked.”

“I soon came to understand the danger the little girl was facing. I knew Hadija would be beaten when she returned from church, so I began walking her home. I would stay nearby watching even though I could not stop it. It broke my heart to hear the child crying in pain as she was caned.”

One Sunday in December 2012, when Hadija’s screams of terror betrayed the escalating violence, Mellina intervened and rescued Hadija. “Her father beat her so badly that she still bears scars on her arm. Consumed with anger, he threatened her with a knife and shouted threats to burn down the church for ‘misleading his child.’”

Mellina rushed into the house, grabbed her, and they ran away. “I was very frightened that day. I left with Mellina when she came for me. She rescued me,” Hadija explained.

“I hid her for a few days while her father looked for her. I thought he would kill us both when he found out where we were staying. Instead, he came and declared that she was dead to him. ‘From now on you are no longer my child! I have denounced you!’ he shouted at her and spat on the ground to confirm his curse.”

Mellina reported the matter to the police. They did not pursue Hadija’s father, but granted permission for Mellina to become Hadija’s guardian.

Hadija’s father, a known alcoholic, is now ill and bedridden. After several months, Mellina and Hadija visited him and found his anger had cooled. He asked that Mellina continue looking after Hadija.

Please pray for my father

“When I remember how he mistreated me, I still feel bad, but when I tell Jesus about all the pain in my heart I start to feel better,” Hadija said. “Please pray that he would stop drinking alcohol and remember that I am his daughter.”

Melina makes a small income from gardening but it is very hard to make ends meet. This is causing difficulties in trying to officially adopt Hadija.

Hadija is full of hope despite her cricumstances, “I want to tell young people that Jesus is good. I want to tell them that because Jesus is so good, we should please Him and preach the Gospel to other people.”

She also has a message for others who are being mistreated or have been abandoned because they believe in Jesus: “I want to tell them to believe in Jesus and not give up. Also, I pray that they will find someone like Millena who encourages me to pray to Jesus.”

“Thank you for coming to see us,” she told an Open Doors worker, with a big smile. “Now I know that we are not unknown to the Lord! You have encouraged and blessed our hearts.”