All Word and No Deed 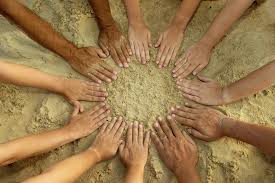 There are occasions when dramatic and testing circumstances help create community. Crises conspire to draw people together. Some events are so extreme they forevermore define the lives of those who were involved in them. Prisoners of war, subjected to humiliations and privations share a special bond with those who were their brothers in trial. Similarly, those who represent their home town or nation in sporting contests know the sense of shared triumph when their team wins. Even those back home feel that they are somehow included in the victory.

Once something happened which was of far greater moment than any human conflict or sporting achievement. It was when God intervened in human affairs by sending Jesus Christ among us. In one immaculate personality God immersed himself in the human story. The entire race was gathered into his experience which forged mercy, forgiveness, justice and brotherhood.

In the event of Jesus ordeal and triumph, the two stand-out social groupings of the world, who existed in a state of mutual contempt, were included in a new human solidarity.  In Christ God made one new man out of the two. The One New Man was the church—Christ and his people,

Christians are called to live out the union they have been given with one another as members of the Christian body. They are called to be a society which rejects the walls of partition which criss-cross human life; a society which respects not the natural and entrenched prejudices which ruin fellowship and help perpetuate injustice and violence.

It takes the church to preach the gospel. A gospel without a fellowship which bears witness to the community God has created out of disparate tribes and parties is disembodied, hollow. It is in the end no gospel at all because it lacks  incarnation. It is all word and no deed.

Whether we feel it or not, God has bound us to others in Christ.  He has gathered us into his vast kindness and mercy—together with folks whose company we would not have chosen. We belong to them and they belong to us.  We are family, brothers and sisters. It is our privilege and duty to show the world what society could be like when arranged according to God’s intention through his mighty work in Christ.

“For he himself is our peace, who has made the two one . . . His purpose was to create in himself one new man out of the two, thus making peace”(Ephesians 2:14,15).

Thank you for this reading. It is a word in season for me.