Congolese Refugee Discovers “I just have to love them.” – Uganda 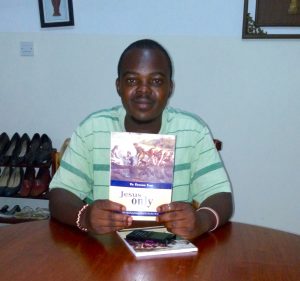 The Gospel is being revealed in new ways, even to those who already believed they were living in the truth. David Banza is a Congolese refugee who has seen harsh times, but has recently been involved in a church group.

Moses Lukwago, a partner with GNU in Uganda, once directed a choir that David was a part of, and they have since remained in contact. David’s understanding of salvation used to be based upon how many good deeds one could do and how well one kept the law.

When Moses realised David’s perception of Christianity, he gave him a book, Jesus Only, and encouraged him to read it. Moses says:

The next time David came to visit, he was asking me where I got this book. He said he asked some church leaders questions about Christianity but they were never really able to provide clear answers.

After having more conversations together, David now realises that he is saved by grace alone. He knows he doesn’t have to struggle with the fear of hell because Jesus took it upon himself on the cross. David says:

I don’t have to offend other people if they don’t yet have Jesus. I just have to love them.

David wants to give copies of the book Jesus Only to his friends so that they have a better understanding of the gospel. These books would need to be translated into their native languages, but God continues to provide opportunities for us to Spread Word Fast.