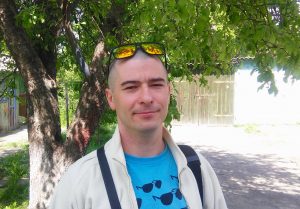 Eugene’s journey to Jesus has been difficult, but now he has reason to smile.

From the depths of drug addiction to the joy of freedom and healing in Christ, Eugene today is a vibrant witness to the power of the Gospel. But it wasn’t always like that. Eugene is one of the first fruits for the Kingdom of God, of a new phase of GNU’s ministry in Ukraine!

The country of Ukraine has a high rate of serious addictions and crime. In the city of Poltava, Good News Unlimited has been bringing the gospel to some of the most needy people in society, and dozens of lives are being changed. Eugene shares his story:

I was born and grew up in an ordinary Poltava family. When I was just 12 years old I tried alcohol for the first time, and unfortunately, I started to crave it. Because alcohol seemed good to me, I decided to experiment with other drugs. The same year, I began smoking marijuana. When I was 16, I started taking tablet drugs. From ages 22 to 25, I used injected drugs, and not only that, I was distributing drugs as well.

Eugene remembers an instance where he believes God showed him mercy and grace. This encounter sparked a big decision, but the road would not be easy.

In 2008 I was arrested for distributing drugs. I was destined for prison, but a few corrupted policemen said they would let me go if I promised to deliver them a sum of money. For some reason, they gave me back my documents before I gave them the money.  It is as if God showed me that I deserved punishment, but He revealed His grace to me and gave me a second chance.

I decided to stop taking drug injections, but by that time I was heavily addicted, and I continued smoking marijuana and drinking alcohol. I told myself that if I didn’t take drug injections, then everything was under control.

I was married when I was 27, and I made a firm decision that for my wife’s sake I would stop taking drugs. I managed only to do so for four months. After the first quarrel with my wife, I went right back to drugs. Again, I kept telling myself that everything was under control. After all, I was only using the drugs once a month. But then it became once a week and two years passed like that. My relationship with my wife was in a state of crisis.  She tried to draw us to God, but I didn’t want that. I said to her, “What God is there?” I thought before that when the time came for me to have a family, I would be able to give up all the drugs. Nevertheless, my soul was lacking something and to fill that void, I turned again to drugs.

Eugene experienced several years of inner struggle that caused harm to himself and his family. He recalls a spiralling series of events which eventually opened his eyes and brought good intentions to the fore once more:

The year 2015 was a major turning point for me. At that time, my wife had left me, but we met from time to time. That is, until we had another argument over drugs, and she stopped seeing me altogether.  I had completely relapsed. When my wife left me, I was left totally alone. I frightened my employers. To get money for drugs, I was selling all the gold I had and also selling building materials I had been stealing from my workplace. I was even stealing money from my parents. I could have kept going this way, and one day, I realised that I had reached the bottom: I used drugs for living and I lived for drugs. A fellow addict told me about a hospital where people could be treated for addictions but I decided to try to give up drugs on my own.

I remember that on 20 August 2015 I had not slept for two days and my body was very sick. I could not sit still. I felt a bit better when I walked or exercised to keep my mind off of the cravings, but I realised I could not keep going like this anymore. I finally called my parents and told them I was an addict.

Eugene saw grace play out in his life once again. It was the support of Evgenii’s parents which set into motion a path to their son’s transformation.

My parents helped me by paying for a treatment program. I was touched by their grace because I thought the bad news would make them reject me. I let my wife know that I was going to the hospital to treatment my mental health issues, but I never mentioned to her that it was because of drugs.

I was just reading the Book of Revelation when I was invited to a Gospel programme. I appreciated the attitudes of life and joy of those who had invited me. Nobody imposed their opinions onto me. They treated me with love and respect. While attending the seminar I really began to understand what baptism is all about. I did not understand everything, but I still knew that I wanted to be baptised. 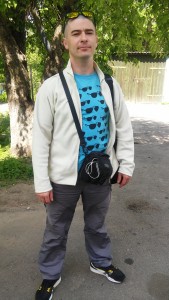 Eugene stands in confidence since he has accepted Christ as his saviour.

Since beginning a journey of spiritual healing, Eugene has cause to hope for healing in other areas of his life as well. He shares the way God answered a big request:

I am now developing emotionally, intellectually, physically, and most of all, spiritually. But, frankly speaking, I still wonder about my wife, where she is, how she is doing, and if she will ever desire to enter my life again. I thank God that I was recently accepted into a program to help cure addicts who have hepatitis . They don’t usually accept patients who have hepatitis at my stage at my stage. But I had prayed about this every day and I have been allowed to commence  the treatment program.  The procedures and medicines have resulted in almost no side effects, and my guarantee for recovery is 92–94%. Glory to God!

Eugene has experienced the kind of transformation that only Jesus can bring.  He is proof that the gospel message is relevant, life-changing, and that suffering people still find solace in the Father when they learn of his love. Since attending GNU’s programmes, Eugene is even more confident going forward in his relationship with Christ.

On the 2nd of April, 2016, I was born again in Christ. Jesus is far more than a release from addiction. I have a friend who also gave up drugs, but he does not know Jesus, and he tells me there is emptiness in his heart. My heart is at peace because I do have Jesus. Since I started studying the Word of God, I have treated each day as a gift. I am not afraid of tomorrow. I have plans, and life has its ups and downs, but I have no fear.