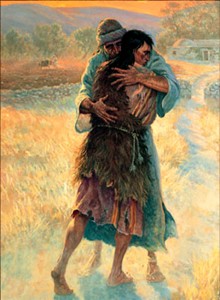 The glare of the day had softened.  In the west

A crimson glory lingered, where the sun

A short time before had slipped behind the hill.

The warm and wine-like air of early spring

Caressed the buds of living green

And fondled them with sighs of ecstasy.

The nobleman of Israel paced his roof

And pondered on the past.  His steady gaze

Turned always toward the south.  In fancy’s eye

Her gay festivity and empty joy.  How often had

This younger son of his climbed to the roof,

And watched the caravans that tinkled down to Egypt,

Counting too the camels as they laboured up the hill,

And, by the huge red stone, turned out of sight.

The father looked there now, and strained his eyes

Of threescore years to see that stone,

Beyond which he had seen his best-loved son,

The idol of his being, disappear.

The sunset glory in the western sky

His heart a-throb with sacred memories and yearnings,

His old eyes bedimmed with tears.  “My boy, my boy,

Where is he? Who is that, rounding the corner

By the landmark stone?  Some wanderer indeed.

See how he limps upon his weary feet,

And mark the droop of shoulder- the exhaustless listless way

See now he straightens up in pride and dignity,

Half hesitating. Surely it is not he.

It is my son!  Make haste my withered bones,

Leap down these stairs and carry me in haste to meet my boy.

My son was dead.  He is alive again. My heart’s delight

Was lost. But now he’s found”.

The twilight shades were deepening into gloom.

The saffron in the western sky had gone.

No more the breezes sighed among the trees,

And over all brooded …..tranquility;

Upon the shoulder of the nobleman, the prodigal

Had faltered out with tears –

Repentance.  Folded in his father’s robe,

Together they went home,

Beneath the Syrian stars.