Get Out of Here!

When the great preacher D.L. Moody was a young man, he was called to officiate at one of his first funerals for an important man who had recently died. 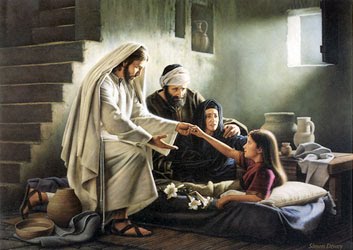 So the young Moody went to the Bible to find a fitting funeral sermon that Jesus had preached, and so model his own sermon on that of the Master. He diligently searched the gospels, and he discovered that Jesus never once preached a funeral sermon. In fact, he broke every single funeral that he is recorded as having attended, because you can’t have a funeral without someone being dead. And every time that Jesus attended a funeral, he caused the one who had died to live again.

In Matthew chapter 9, a synagogue leader asked Jesus to his come to his house because his daughter had died. We are told in v.23 that when Jesus arrived, the house was full of noisy mourners, as the custom was at that time. They were crying and wailing and making loud music to call attention to the death of this girl.

When Jesus entered the house, he said to everyone, “Go away!” (NIV). Another way of saying it would be “Get out of here!” They laughed at him. But he went in and took the girl by the hand and she got up (v.25). Another funeral broken up. Death flees in panic when he Prince of Life announces his presence and says, “Get out of here!”

That’s why, one day soon, it will be so simple. It will be just as natural for the sun to rise, the birds to sing, and for the waves roll home to the shore. Christ will take your hand, and the hands of those who have chosen his kingdom of life, and we will all get up… To read more, click below…Where, O death, is your victory?  Where, O death, is your sting?

The sting of death is sin, and the power of sin is the law.