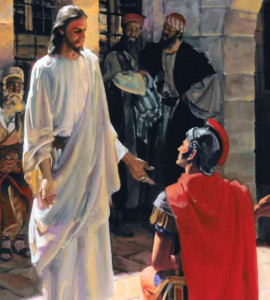 A centurion based in Capernaum came to Jesus asking for help. “Lord,” he said, “My servant lies at home paralysed and in terrible suffering.” Jesus said, “I will go and heal him.” The centurion replied, “I do not deserve to have you come under my roof. Just say the word and my servant will be healed.”… When Jesus heard this, he was astonished and he said to those following him, “I tell you the truth, I have not found anyone in Israel with such great faith. I say to you that many will come from the east and the west, and will take their places at the feast with Abraham, Isaac and Jacob in the kingdom of heaven. But the subjects of the kingdom will be thrown outside…. Jesus said to the centurion, “Go! It will be just as you believed it would. And his servant was healed at that very hour.” (Matthew 8:5-13).

This centurion, a senior officer in the Roman army, had great faith in Jesus. Although Jesus was the son of Jewish parents, and grew up in the Jewish culture, this was not an obstacle to the centurion. Jesus had given clear evidence that he was the Son of God, and that was sufficient for the centurion.

Jesus’ own people, however, among whom Jesus had performed many marvelous miracles, did not have the faith in Jesus that the centurion did. Jesus turned to them and said, “Many non-Jews: unchurched people from all corners of the earth, will be accepted into God’s kingdom, while the subjects of the kingdom—those classed as believers, will be rejected.”

Nobody is automatically accepted into God’s kingdom, simply because he has his name on the church books. According to the word of Christ, the only book that will count in the end is the Lamb’s Book of Life (Rev. 3:5).

How may you and I get our names inscribed in the Lamb’s Book of Life? By putting our faith in Jesus, and Jesus alone.