Note from Eliezer – Priscilla was baptised at Ostend, Belgium on Wednesday, 16 July 2014 at the end of the Gospel Revival Week run by Good News Unlimited in Belgium, Brussels. Her story was translated by Pr David Kayumba from a recording of her audio testimony shared at the gospel fellowship which she started in her home on the very day of her baptism.

Priscilla’s tears of joy at her baptism.

All my life, I attended my traditional church and did all religious rituals without understanding, but because every one in my family did it, so I did it. I did not question any thing until the time my entire family: parents, husband and brothers and sisters were wiped out in the Rwandan Genocide. I have been angry with God since that time. My own life experience gives me every reason to hate God and some people; it is bitter and at times I have trembled in anger and sadness!

The fact that my people perished the way they did, shook the simple religious life I practised in my ignorance. I became bold in questioning any one who told me anything about God. You see in my family, we did all religious rituals honestly. We had even saints to talk to. But these did not shield my family and my self from what happened to us!

In my bitterness I met several people who tried to bring me back to God and I got more bitter and hated them for this. Many times I thought about going back to God and this meant either returning to the religion I grew in or going to other faiths. But my heart wanted to at least appease my departed parents. I became more and more confused. On one hand I had bad company of friends who did not fear God. And we used to laugh at those who get saved. We could say, ah, they are getting saved of their many sins. We saw ourselves as better people! And so, every time I wanted to take a stand to follow Jesus I would be held back by the bitterness in me and the peer pressure.

As time went on, I started meeting people who lost every relative in the Rwanda Genocide. And these people seemed more positive than myself who at least had some relatives. I began to realise that the more I forgot about God the more I forgot myself; and this is painful!

Three years ago, I got sick, very sick, so that no one knew I would survive. One night of the three months hospitalisation, I heard a male voice that spoke to me saying, “Don’t worry you will survive”. In my little strength I said a few things to God in gratitude. Surely I did survive. God intervened! He intervened in my sickness while I hated him and ridiculed him. From that time I decided to try to develop a relationship with God. I warned my friends that I would not listen to any one discouraging me on my quest to find Jesus. I have abandoned many of those friends.

I hated my past pride and hatred I had for God. I have been wondering what to do with this past. I have been wanting to make a headway, to take a certain step but I have not been finding a way. Thanks to God the right time came last week. My troubled friend invited me to the Gospel seminar in Brussels where I had an opportunity to listen to Pr. Eliezer from Good News Unlimited. I attentively listened to every sentence. Every thing he said, he spoke to me in a language I never heard before! What I heqrd in this Gospel seminar turned me around in a way I cannot explain. All my friends are surprised and others are angry at me.

Anyway, I had a very important question whose answer I have been seeking for a very long time. This question reflected the burden I have walked with for a very long time. It is about whether all sins are equal and about forgiveness. I got a great answer that raised me up from hopelessness and paced me on a strange place I have never stood before. I nearly cried because of an exceeding joy that came into my heart. I was this lost sheep and Jesus found me. Now I know, no one can teach me how to forgive, only Jesus who forgave me. This was the burden that had prevented me from surrendering to Christ. I did not know how to forgive, all I knew was hatred for my enemies, and they are many. 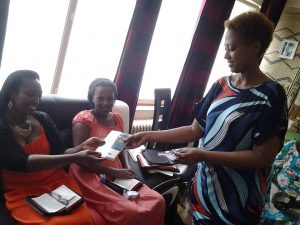 Priscilla giving the book “Jesus Only” to her friends at the gospel fellowship she started in her home the afternoon of her baptism.

Pr. Eliezer spent a lot of time on this question and I can see he identified himself with this question and by the time he finished answering it, I felt a great load falling off me. I felt liberated. I felt ready to take any step, ready to be baptised. I did not know he would make a call for baptism; and when he did I was ready to do it for my Lord who had been seeking after me. In that hall, I stood alone at the invitation to get baptised. I looked around, and I was alone. I thanked God that I was standing alone; because I perfectly fitted the lost sheep parable. There I was alone and being found. I found complete rest in knowing that my name is now written in heaven. When David asked me if I was ready to get baptised the next day. I told him; I am ready now. The following day we drove 89 km to the sea and Pr. Eliezer baptised me. God used Pr. Eliezer to bring me to the point I was able to see Jesus in the light I had never seen him before. I desire to love Jesus more and more and I pray for strength to keep in faith. This day, I will always remember. And by the way on this day three things happened after my baptism. I have been struggling with certain issues here, but all three were solved that same day!

Pr. Eliezer told me the story of my forgiveness in Christ, by the blood of Jesus shed for me long time ago, and here I was running away from the only person who loves me this much. Now I found that the blood of Jesus is the basis for me to forgive others. I was forgiven so much! Now I stand rejoicing in the Church of an Empty Tomb.

I was humbled when last Saturday I was given a privilege to stand up in our home fellowship to give the gift [JESUS ONLY] from Good News Unlimited to my invited friends. What  an experience!

Note from Pr David – I have translated Priscilla’s testimony as she gave it except for her many tears and those of those who were present. It is very hard to say what her many tears said. She was hurt greatly, but what she received  from your messages has conquered her heart for Christ. She told us at the end of the meeting that ” I have no doubt – Good News Unlimited was sent for me”. And this is true.