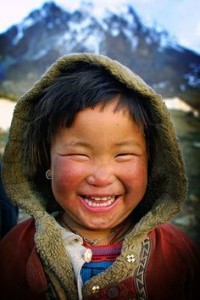 And Abraham called the name of his son who was born to him—whom Sarah bore to him—Isaac. – Gen. 21:3

I wonder who laughed the loudest when Isaac was born? Was it his father Abraham, who was 100 years old? Was it Sarah, who was 90? Or was it the newborn baby himself?

The name “Isaac” means “laughter.” This old aged couple had a sense of humour when they named him. After all, Sarah had laughed at God when she had heard the promise that they would have a son. And now that their home was filled with laughter after so many years of silence, the new mother and father laughed at their own foolishness at having once disbelieved what God had promised them. And so the Apostle Paul writes that,

Against all hope, Abraham in hope believed and so became the father of many nations, just as it had been said to him, “So shall your offspring be.”… 22 This is why “it was credited to him as righteousness.” 23 The words “it was credited to him” were written not for him alone, 24 but also for us, to whom God will credit righteousness—for us who believe in him who raised Jesus our Lord from the dead. 25 He was delivered over to death for our sins and was raised to life for our justification. – Rom. 4:18–25.

Isaac, that little baby whose name means “laughter,” the one who brought impossible joy, was just an anticipation of another little child who would bring impossible joy, and laughter to this world – the Messiah, Jesus Christ.

And if we believe in his promise, then no matter how unlikely it may seem to us today, impossible joy will be ours as well. We will laugh again, and laugh like we’ve never laughed before.