Is the Idea of the Cross “Barking Mad”?

Celsus was one of the pagan philosophers in the second century, and he wrote that that idea that a man who had been crucified should be worshiped was so unbelievably stupid, that it was worse than the fairy tales that women told children. And in writing this, he was being very unkind to both women and children. The earliest graphical depiction of Christ apparently shows him as a crucified man with a donkey’s head, being worshipped by a man called Alexamenos. See the attached picture. This is from Rome from the second or the beginning of the third century.

All of this mocking by unbelievers even influenced some Christians to have some very strange views. For example, in one of the Gnostic gospels, Jesus is talking about the idea that he had been crucified, and He says, “[i]t was a joke, I tell you, it was a joke,” and then Jesus then mocks Christians who “proclaim the doctrine of a dead man.”[i] The idea here is that Jesus played a trick on everyone by kind of projecting an image of himself on the cross, like a hologram, but he wasn’t really there at all, because He was God and he wouldn’t ever let himself be crucified, would he?

In antiquity, the idea that you should worship someone who had been crucified was shameful, illogical, and morally offensive. Some Christians considered themselves too sophisticated to believe that they were saved by Jesus’ death on the cross. And of course this view continues to our day.

Islam believes that Jesus was prophet, and that he was crucified, but that he did not actually die on the cross. And of course we have the New Atheism, with Richard Dawkins as one of its lead proponents. In his book, “The God Delusion,” Richard Dawkins calls the idea that God sent His Son to this earth to die for our sins, “barking mad.” There are also many Christians today who do not believe that we are saved by the substitutionary and sacrificial death of Jesus Christ.

So you see that nothing much has changed since the time when the message of the cross was first preached to the world. The offence of the cross has not ceased (Gal 5:11); and yet, it is our only hope. 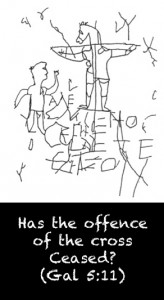