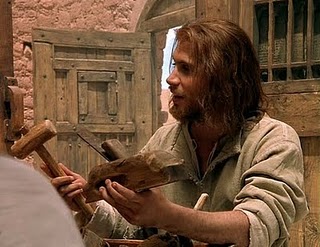 Jesus spent almost 90% of his life in and around a carpenter’s shop. That was his father’s trade, and that was his trade as well.

We don’t get many glimpses of his life as a carpenter. Jesus usually refused to talk about his own life, and instead spoke about the lives of his hearers. That’s why his stories were so often about farmers and fishermen. He hardly ever mentions carpentry – his own trade.

But there is one very notable exception, and we find it in the seventh chapter of Matthew, where Jesus talks about sawdust and planks of wood.

Have you ever worked with timber? Have you ever got some sawdust in your eye? I have. Do you remember how absolutely annoying that was? Have you ever been injured by a heavy plank of wood? I have. It can cause serious injuries, and a nasty bruise at best.

As Jesus was teaching the people, his own experiences apparently came into his mind, so that he said to them,

What attracts my attention is that Jesus must have had sawdust in his eyes at different times and knew how annoying that could be. I can imagine him trying to rub his eye in the workshop (probably what you shouldn’t do) and trying to rinse his eyes out. A speck of sawdust in your eye can be very annoying.

This is quite a hilarious picture really – imaging some guy walking around with a plank of wood sticking our of his eye and saying to someone else, “Umm… excuse me… I think you have a speck of sawdust in your eye that should come out.” Imagine this guy with a plank of wood sticking up out of his eye trying to look into your eye and telling you what’s wrong. He’d be bowling everyone around him over, wouldn’t he? He’d be causing serious injuries left, right, and centre!

Jesus could be quite a funny guy as he pointed out the quirkiness of how we humans behave. Also deadly serious at the same time…

How should we apply this to our own lives? We were the ones who were mortally wounded by the planks of wood. Christ took those planks of wood and was nailed up on them. He was judged as worthy of death so that we might be judged as worthy of life in him. He is, after all, the Carpenter of Nazareth; the Master Craftsman knows how to deal with timber. His greatest production was at the Carpenter’s Workshop of Calvary, where He produced salvation for the world.

And that speck of sawdust in your brother or sister’s eye? It will pale into insignificance compared to the story that you’ll have to tell!

“Do not judge, or you too will be judged. For in the same way you judge others, you will be judged, and with the measure you use, it will be measured to you. – Matt 7:1–2.