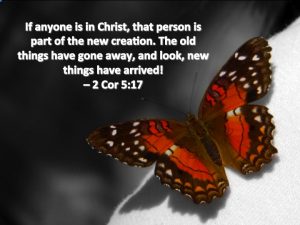 When I was around 8 years old I saw a film that showed how caterpillars turned into butterflies. I was really impressed by that; you know, how first there is this grub, crawling along the ground, and then it does its cocoon thing, and then emerges as this gloriously beautiful butterfly, fluttering off in a riot of colour. The film featured this verse: “if anyone is in Christ, that person is part of the new creation. The old things have gone away, and look, new things have arrived!” (2 Cor 5:17, CEB). I thought that was awesome, and I really wanted to be that butterfly. That’s why I still remember it today. What an amazing concept!

But as the years went by, I found that verse more and more discouraging. Why? Because even though I considered myself to be a believer in Jesus, I didn’t feel like a new creature; in fact, I felt like the grub. I was still myself, with the same personality, still sinning. So where was the bonus of being a Christian?

Now, the only way that you can get into the kingdom of Jesus is to have a clean record. 2 Cor 5:19 tells you that the way only way to have clean record is if God doesn’t count your sins against you. The only way. Full stop.

According to what Paul tells us here, what changes in us is how we see people, and our attitudes toward others. Paul says in v.16, “from this point on we won’t recognize people by human standards?” Why? Because Christ hasn’t treated you according to human standards, but according to the standard of infinite and Divine mercy. As a result, we can never look at others in the same way again.

The change that life in the kingdom of God brings is not an obsession with character perfection, or with our efforts with becoming what we cannot become in this life. The change is that we become agents of reconciliation, empowered by the Spirit of God; we become agents of grace, mercy, and kindness. You are still yourself, and I am still myself, but our attitudes towards each other will change. After all, the One who has delivered us has given us new job descriptions, as representatives of the King of Reconciliation.