Nobody Comes to Jesus Dressed in Their Sunday Best

Matt. 27:35 – After they crucified him, they divided up his clothes among them by drawing lots. 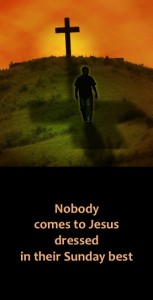 The idea that Jesus at the cross wore a modesty cloth to cover his loins is a medieval invention to avoid the fact that at the cross, Jesus was naked. The whole point of crucifixion was to so humiliate and dishonour a man so that no one would ever follow his example again. The Romans crucified people high and naked so they could be exposed to as much abuse and lewdness as possible.

It is interesting how often the Bible mentions that you need to change clothes when you come to God. From Adam and Eve, Moses, Aaron, Joshua the High Priest, the demoniac by the lake, and others – all of these stories talk about changing clothes when you come before God. At some stage you have to get naked before Him.

Clothes symbolise how each one of us choose to demonstrate our identity to other people. They show things like how much money we have, something our personality, the work that we do, and so on. In the same way, they also symbolise how we choose to present ourselves before God.

Everyone who comes to God in faith must leave his or her clothes at the foot of the cross. That’s what the terrorist did. That’s even what Jesus did. Jesus sacrificed himself, without a stitch of worldly pride, worldly ambition, or selfishness –the spotless Lamb of God. God doesn’t value what we value. The Roman soldiers thought that the clothes were value at Calvary. They gambled for them at the foot of the cross. But Jesus didn’t need them to be the Saviour of the World, and neither did the terrorist beside him need them to enter into salvation.

And when you have come to Jesus at Calvary, you will also find out the good news that no one who comes by faith to Jesus ever leaves naked. Jesus died naked so that you will never be naked. You will be dressed by God exactly as Jesus was dressed by the Father after his resurrection. They will be dressed with a beautiful robe of righteousness. This is the clothing that we all really want: a robe that says, “I belong to God, my sins have been forgiven and the righteousness of God is credited to my name; this is my identity, I am untouchable in Jesus Christ.”

So come to Jesus now. Come to Jesus today. Because nobody ever comes to Jesus wearing their Sunday best.

I'm so glad you're blessed by it. The message hasn't changed from the beginning, and it will not change in eternity. We are only saved through Calvary, through the mercy of Jesus, and it is a salvation to which our works can contribute nothing.

Another great gospel message. I'm blessed, extremely blessed by it.