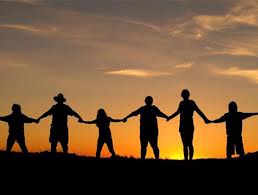 The temple that stood in Jerusalem at the time of Christ was built by Herod the Great. It was an impressive structure; forty years in the making.  The temple proper rose above the rest of the complex on an elevated platform. To the east of the holy places was the court of the priests.  Eastward again was the court of Israel to which only Jewish men were permitted entry.  Still further east was the court of the women into which Israel’s women had access.

These three courts: one for the priests, one for the men and another for the women, all stood on the same level as the temple’s inner sanctum.  Outside of the court of the women, and five steps down, was a walled platform. Then another fourteen steps a wall beyond which lay the court of the Gentiles. This area was not just east of the temple but all around it. It was as close as a non-Israelite could come to the temple. At intervals along the stone barricade, written in Greek and Latin, were announcements warning all Gentiles of certain death if they encroached.

The geography of the temple precinct was a paradigm of the social divisions that pertained in New Testament times.  Jewish orthodoxy accepted this ‘apartheid’ structuring of society. They knew in their heart that they were destined to be near God, while others were to remain far away. This huge rift  running through the ancient world was believed to be sanctioned by God.

But the gospel does not divide, it unites, it closes the gaping wounds which keep people apart.  God does not have favourite people, favorite races or nations.  God does not have pets.  Men in suits are not more pleasing to him than those with blue collars. The same is true of the educated versus the unschooled, rich or poor, man or woman, single or wed, gay or straight, labor or liberal.

One thing is certain: God is never on the side of those who think they have a valid reason to suppose God likes their company more than anyone else’s.  God is on the side of the human race. He is on the side of fellowship.  Christians know that they are part of a large family composed of a vast array of different cultural and religious traditions. They are fellow-citizens with God’s people.

“Consequently, you are no longer foreigners and aliens, but fellow-citizens with God’s people and members of God’s household” (Ephesians 2:19)

The relatives we can't see with our eyes are every more important than those we can! An astonishing thought...